Here is a selection of books from our collection about immigrants and refugees and their experiences leaving their home countries and adjusting to life someplace new. We strive to include as much varied racial/cultural representation as possible, with a focus on #OwnVoices, but these lists also reflect what is available on the market. These titles are only a sample of what you can find in our full collection. To see more, go to Search the Collection, scroll down in the gray box to Immigration, and click on Immigrant/Refugee.

"Separated from his family when they were forced to flee their home, a young East African boy named Deo lives alone in the Lukole refugee camp in Tanzania. With scarce resources at the camp, bullies have formed gangs to steal what they can, and a leader named Remy has begun targeting Deo. Then one day a coach gathers all the children to play soccer. Though Deo loves soccer and has even made his own ball out of banana leaves, he's unsure at first about joining in when he sees Remy on the field. But as Deo and the other boys get drawn into the game, everything begins to change. Their shared joy in playing provides the children-- including Remy--with a sense of belonging"-- Amazon.com 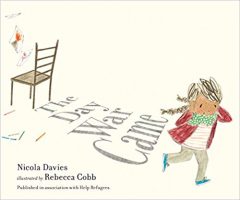 by Nicola Davies and Rebecca Cobb

A powerful and necessary picture book - the journey of a child forced to become a refugee when war destroys everything she has ever known. Imagine if, on an ordinary day, war came. Imagine it turned your town to rubble. Imagine going on a long and difficult journey - all alone. Imagine finding no welcome at the end of it. Then imagine a child who gives you something small but very, very precious ... When the government refused to allow 3000 child refugees to enter this country in 2016, Nicola Davies was so angry she wrote a poem. It started a campaign for which artists contributed drawings of chairs, symbolising a seat in a classroom, education, kindness, the hope of a future. The poem has become this book, movingly illustrated by Rebecca Cobb, which should prove a powerful aid for explaining the ongoing refugee crisis to younger readers.

An illustrated picture book autobiography in which award-winning author Yuyi Morales tells her own immigration story.--Provided by publisher

What is it like to have to leave everything behind and travel many miles to somewhere unfamiliar and strange? A mother and her two children set out on such a journey; one filled with fear of the unknown, but also great hope. Based on her interactions with people forced to seek a new home, and told from the perspective of a young child, Francesca Sanna has created a beautiful and sensitive book that is full of significance for our time;-- Provided by publisher

by Terry Farish and Ken Daley

Priya Dreams of Marigolds and Masala

Priya lives in the United States and her family is from India. She feels the magic of the place her family comes from through her Babi Ba's colorful descriptions of India--from the warm smell of spices to the swish-swish sound of a rustling sari. Together, Priya and Babi Ba make their heritage live on through the traditions that they infuse into their everyday lives.

Explores the experience of immigrants who came to America in the twenty-first century, celebrating the diversity of the country and hope for the future

by Jairo Buitrago and Rafael Yockteng

A young child describes what it is like to be a migrant as she and her father travel north toward the U.S. border. They travel mostly on the roof of a train known as The Beast, but the little girl doesn't know where they are going. She counts the animals by the road, the clouds in the sky, the stars. Sometimes she sees soldiers. She sleeps, dreaming that she is always on the move, although sometimes they are forced to stop and her father has to earn more money before they can continue their journey

We are like the clouds / Somos como las nubes

by Jorge Argueta and Alfonso Ruano

Why are young people leaving their country to walk to the United States to seek a new, safe home? Over 100,000 such children have left Central America. This book of poetry helps us to understand why and what it is like to be them.

"A hopeful and timely picture book about a spirited little girl living in a refugee camp. Of all her friends, Abia has been at the Shimelba Refugee Camp the longest--seven years, four months, and sixteen days. Papa says that's too long and they need a forever home. Until then, though, Abia has something important to do. Be a queen. Sometimes she's a noisy queen, banging on her drum as she and Mama wait in the long line for rice to cook for dinner. Sometimes she's a quiet queen, cuddling her baby cousin to sleep while Auntie is away collecting firewood. And sometimes, when Papa talks hopefully of their future, forever home, Abia is a little nervous. Forever homes are in strange and faraway places--will she still be a queen? Filled with hope, love, and respect, Wherever I Go is a timely tribute to the strength and courage of refugees around the world."--Provided by publisher