As Asian American and Pacific Islander (API) Heritage Month 2018 winds up, the Diverse BookFinder has 291 books with Asian/Pacific Islander/Asian American characters identified in our current collection. (We are constantly adding titles, so these numbers keep changing. Also, we code by character, not title, so a number of these characters may appear in books with white protagonists or multiracial casts. For instance, seven titles portray adopted Asian children, usually in non-Asian families.)

At first glance, a few aspects of representation become clear:

These titles show some of the range of representation of Asian and Asian American characters in recent picture books:

Approximately half of the titles featuring Asian characters take readers on cultural journeys to encounter traditions, foods, celebrations, language, and other markers of culture, in countries across Asia or brought by immigrants to their new homes. These stories offer reflections for Asian children and for everyone else, opportunities to learn how others live.

A day I remember

This is a day that Swayam will always remember: he's going to be "Markundi", the boy who keeps the bridegroom (his uncle) company through the wedding preparations

When all her older siblings are away, Cora's mother finally lets her help make pancit, a Filipino noodle dish. Includes a recipe for pancit

by Truong Tran and Ann Phong

A young girl visits her grandmother in Vietnam where her parents were born and learns that she can call two places home.

King for a day

by Rukhsana Khan and Christiane Kromer

"Even though he is confined to a wheelchair, a Pakistani boy tries to capture the most kites during Basant, the annual spring kite festival, and become "king" for the day. Includes an afterword about the Basant festival"-- Provided by publisher

Each member of a Chinese family contributes to the celebration of the Mid-Autumn Moon Festival. Includes author's note explaining this festival's customs and traditions.

by Uma Krishnaswami and Ruth Jeyaveeran

Embarrassed by her clumsiness, eight-year-old Meena, an Asian Indian American girl, is reluctant to appear in the school play until she gains self-confidence by practicing yoga

Athletes and artists, scientists and film stars, and innovators and activists (including Gandhi in three books and Malala in two) are among the figures portrayed in biographies of Asians and Asian American.

Half of the six titles featuring Asians in our Oppression category are about Japanese internment, including Fish for Jimmy. Another tells the story of Gandhi’s March to the Sea in response to the British colonial government’s prohibition on Indians harvesting their own salt. Two are biographies of Asian Americans facing prejudice in their fields: Anna May Wong in film (see Shining Star above) and Sammy Lee in Olympic swim competition.

When brothers Taro and Jimmy and their mother are forced to move from their home in California to a Japanese internment camp in the wake of the 1941 Pearl Harbor bombing, Taro daringly escapes the camp to find fresh fish for his grieving brother

A handful of titles feature Asian child protagonists in stories that Any Child might relate to, without identifying cultural markers in the text.

Ming and her Poppy

"Ming and Poppy's journey takes them over sidewalk cracks and dancing shadows, past honking horns and crowded crosswalks. They greet old friends and make new ones, while sharing stories, secrets, and the sting of painful words"--|cProvided by publisher 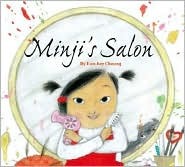 While her mother is getting her hair done in a salon, Minji tries a new style on the dog at home

Anne Sibley O’Brien is a children’s book writer and illustrator who is active in diversity education. She is a co-founder of the Diverse BookFinder.