I’ve written previously about the importance of books about Jews that go outside the usual trifecta of holidays, Holocaust and Israel. Jews exist all around the world, have differing observances and levels of religiosity, and lead ordinary, relatable lives. And so the books found in the Diverse BookFinder collection about Jews are important didactically, to broaden understanding about the multiplicity of Jews and Jewish experience.

But—are the books interesting? Can they hold the attention, and engage the imagination, of children? The most well-intentioned books have no effect if they aren’t appealing. To test this, I read fourteen of the books about Jews in the Diverse BookFinder collection with my five-year-old. Our mutual results follow. And since I had a focus group of one, results may vary.

The books found in the Diverse BookFinder collection about Jews are important didactically, to broaden understanding about the multiplicity of Jews and Jewish experience -- but are they interesting to children?

I liked the emphasis on commonality between the Jewish and Muslim children in this story; a shopkeeper even mistook them for brothers. And the interaction between them was only ever friendly. However, the plot didn’t really have anything exciting in it (other than the two children hiding from their mothers at the playground on one page). So my son didn’t like the book, and attempts to draw him out were met with “I’m not interested, Mom.”

In this story, a girl from a blended Jewish/Chinese family used an argument about chicken soup with dumplings to highlight the similarities between different traditions; and even pointed out that mixing them could result in “the best of both.” My little one and I both found it really funny; and he pointed out that someone can be “just as Jewish” while also being Chinese. His final word? “I just like this book!”

When Isobel visits her Aunt Luisa at Hanukkah, she not only has a wonderful time, she learns some new things about this special holiday

This was a sweet story about a Mexican-American Jewish girl and her aunt, and the Sephardic Jewish celebration of the new moon that occurs during Hanukkah. Although the book falls into the holidays category I usually avoid, I selected it for its depiction of Jews of Mexican descent. And I wish there had been more information about them in the book. Instead, there was much more emphasis placed on Hanukkah sweets—my son “liked that she kept popping treats into her mouth,” which might not be the best lesson to take away.

This was a reworking of a traditional Jewish story often called “Two brothers” that depicts familial love and kindness. Here, it was transformed into a story about cross-group friendship between a Jewish woman and a Muslim woman in the Middle East. My only quibble was the emphasis on the religiosity of the women, which might make it less relatable for non-theistic households like ours. Overall, though, it was a success, and the little one “just thought they were nice.”

Queen of the Hanukkah dosas

by Pamela Ehrenberg and Anjan Sarkar

A boy is worried that his little sister's climbing will spoil the first night of Hanukkah, when his family combines his father's Jewish traditions with his mother's East Indian cooking

This was another funny story about a blended Jewish family (this one Jewish and Indian). It was more focused on everyday family and sibling dynamics than on holiday observance. Because of this, my son found it very relatable; his favorite page involved one of the children climbing onto the kitchen counter to push buttons (something he also likes to do). He readily accepted that Jews can have differing holiday foods based on differing backgrounds, and admonished my questioning otherwise with “I think Jews can do whatever they want!”

Fridays are special,by Chris Barash and Melissa Ewai. This gentle rhyming story featured a multiracial family preparing for Friday Sabbath observance. Like Hanukkah Moon, I chose to include this holiday story because it highlighted diversity within the Jewish community. My kiddo readily accepted the multiracial family, telling me “I think anyone who’s born to be Jewish or wants to be Jewish can be!” But, probably because of the rhyming constraints on the plot, he found it overall too slow-moving for his taste.

I think Jews can do whatever they want...I think anyone who's born to be Jewish or wants to be Jewish can be!

Room for the baby

by Michelle Edwards and Jana Christy

A little boy frets that the sewing room where his baby brother or sister will sleep will never be emptied of things his mother has collected from neighbors for years, but she uses those things to sew and knit everything from diapers to Hannukah gifts

Here I liked the Any Child plot of a Jewish family getting ready for a new baby, the recycling/reuse theme, and the cross-group harmony with the family’s neighbors. Sometimes it’s good to read about Jews simply doing “regular” things like craft projects and cleaning out messy rooms. The little one particularly liked the “green” aspects of the book, and the friendly intergroup harmony. Every time we read the last sentence -- “We use and reuse it all, and sometimes we make something new” -- he added "And sometimes we give it to someone else!”

by Debra B. Darvick

Jews come in every shape, size, and color -- no matter what they look like or where they are from, they are part of the Jewish family. Full-color photographs show the diversity of the Jewish community.

The real stars of the book were the photographs, which included Jews of color not explicitly from blended families. The text captions weren’t very engaging for me (sometimes straining to rhyme); and the Hebrew words like “simcha” and “bris” weren’t explained anywhere, which may limit its appeal to non-Jewish families. But my son liked “looking at the face pictures,” and was happy that “Jews can have brown skin” too.

My son liked “looking at the face pictures,” and was happy that “Jews can have brown skin” too.

Tormented by bullies at their Jewish school in Mexico, Sammy Nurko asks his friend Ilan to help build and control, a small, Aztec version of the legendary Golem, then finds his own strength through the poetry of Nezahualcoyotl.

This story played with traditional Eastern European Golem stories. Here the Golem appeared within the Jewish community of Mexico, and was created not by a rabbi, but by a Jewish child trying to avoid bullies. I liked its Any Child theme of building self-confidence, and the blending of cultures shown by the children learning both Yiddish and Nahuatl. My kiddo particularly related to the Mexican Jewish main character who invented the Golem: “I also like science, and I like inventing.”

The only one club

by Jane Naliboff and Jeff Hopkins

This story explores the many ways in which children feel unique and special. Mrs. Matthews's first grade class begins making Christmas decorations, but because Jennifer is Jewish, Mrs. Matthews allows her to make Hanukkah decorations instead

In this story, the main character viewed being the only Jew in her class with pride, as a source of strength and pleasure instead of isolation. The conflict came not from feeling that she had to cease being Jewish to fit in, but instead from her insistence that her difference was somehow more special than the individualities of others. As such, I liked the emphasis on commonality through difference that came with the resolution. But my son doesn’t like conflict in stories, so he wasn’t a total fan of this book: “When she gets a little bit worried, that’s the sad part for me.” 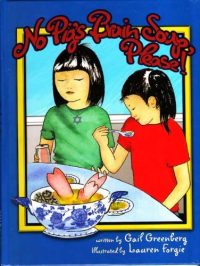 Tali, a young Chinese girl who was adopted as an infant by Jewish American parents, struggles with conflicts of culture, customs, and identity on her school's International Night. Includes author's note and a recipe for pig brain soup.

This story featured a Jewish and Chinese girl, like in Chicken soup, chicken soup. But in this melancholy book, the main character faced both internal and external pressures to choose a single identity, and didn’t feel comfortable inhabiting both until the very end. Because of the conflict between friends, my little one didn’t like the story; he thought the friend “was really mean” and said the story “only made me sad, Mom.”

The Jewish main character in this story fit common depictions of Jews—white, of Eastern European origin, etc. But the book included a tender and emotional cross-group and intergenerational friendship. And it pointed out resemblances between the oppressions faced by Jews and those faced by African Americans. My son was mostly interested in the cat, though—particularly since it was named “Tush.”

A hat for Mrs. Goldman

This was another Any Child book, with a friendship between a Latina child and an older Jewish woman. Cultural and not religious Judaism played a part here, with Yiddish and Hebrew words like “mitzvah” and “keppie” sprinkled (and explained) throughout. The focus was mostly on perseverance, and performing kind deeds for others. My kiddo especially liked the humor of the girl’s initial attempt to make a hat, which looked like “a monster hat.”

This story featured a little-known Jewish community of World War II refugees living in Shanghai, China. I loved the historical section at the back with photographs and details about their experience. I also liked the easy cross-group acceptance and friendship between the Jewish and Chinese main characters, and their mutual interest in each other’s cultures. My little one liked the friendship, too. But he was particularly attracted, like the Jewish main character, to the Chinese lantern festival: “I was really interested in all the lanterns.”

So—did my son learn anything new about Jews? Maybe. Did he enjoy lots of reading time with Mom, and being able to share his opinions? Definitely. Hopefully you will consider replicating my experiment, with these books or others. I’d love to hear how other Jewish and non-Jewish children reacted to the stories!

Our June Shelfie comes to you from Advisory Council member, Deborah Tomaras. Deborah has been a cataloging librarian for more than sixteen years. Deborah joined the Diverse Book Finder to help explore the limitations of traditional cataloging and publishing languages in describing diversity in picture books. She helped standardize the vocabulary developed by other team members, determined how the vocabulary could interact with traditional book cataloging, and provided a framework for describing the vocabulary to other librarians. She earned her MLS from the University of Maryland at College Park, and presently serves as the Metadata and Resource Management Librarian at Marist College in New York.