Note: This post and list of books are focused on East Asian and Southeast Asian representation, in response to recent anti-Asian attacks that have mostly targeted members of these groups as somehow responsible for the spread of the coronavirus. Full representation of Asian/Pacific Islander/Asian American identity of course includes portrayals of Central Asians, South Asians, and Pacific Islanders.

Thanks to Karen Wang, Yueh Qi Chuah, and Yunhee Keough for reviewing and helping to shape this piece.

Today is #StopAsianHate Virtual Action Day. The Diverse BookFinder joins with Americans across the country in expressing our outrage and grief at the recent wave of anti-Asian violence.

Anti-Asian hate crime in 16 of America’s largest cities increased 149% in 2020 ... with the first spike occurring in March and April [2020] amidst a rise in COVID cases and negative stereotyping of Asians relating to the pandemic.

In an essay, “Unapologetically Asian American,” on the website of We Need Diverse Books, JoAnn Yao writes,

My fellow Asians and Asian Americans are correct in calling out the faults in thinking that representation alone is a bellwether of change, or a sign that we are dismantling white supremacy.

In order for these changes to occur, Asian Americans must be seen, as fully human and as American. One of the places that starts is in examining — and changing — who is centered in books for children and what messages this sends to all children. White supremacy thrives in a culture which implicitly teaches all children that white people are more important than everyone else. Representation is not the answer, but it is a beginning.

Representation should not begin and end with visual recognition; it should be specific, honest, and resonant. It should speak to those similar and dissimilar to us alike.

...Because it is the key to unlocking the difference between being seen and being understood. Because the work of dismantling cruel, unequal systems depends on it.

For us at the DBF, events like the recent spike in attacks on Asian Americans mean a recommitment to our mission of examining who is represented in American picture books and how, the toll of erasure and misinformation, and the positive impact of accurate and authentic portrayal. We know that over time, positive representation of our diverse children can shift attitudes.

In their article, “In Search of Mirrors: An Asian Critical Race Theory Content Analysis of Asian American Picturebooks From 2007 to 2017”, Noreen N. Rodriguez and Esther June Kim note these stereotypes,

Due to what seems a particular targeting of Asian American girls and women, with the murders in Atlanta as the most recent tragic example, we’ve chosen to identify books that feature them, acknowledging that the root causes of this violence are an intersection of racism and misogyny.

This selection of titles from our collection was chosen following these guidelines:

Most of all, we looked for books starring Asian girls, celebrating their ingenuity, imagination, strength, kindness, intelligence, beauty — their humanity, to be seen and valued as playing significant roles in the American story. Putting Asian American girls in the center is a much-needed contradiction to pervasive images of submissiveness, foreignness, objectification, and invisibility. Some titles also portray loving relationships with elders, another group that has been frequently targeted by hate violence.

by Barbara Bottner and Yuyi Chen

Amy loves being famous. When a new girl threatens her spotlight, Amy gets jealous--until she discovers that friendship can be better than fame.--adapted from cover description

Amy wu and the perfect bao

by Kat Zhang and Charlene Chua

"Amy loves to make bao with her family. But it takes skill to make the bao taste and look delicious. And her bao keep coming out all wrong. Then she has an idea that may give her a second chance…Will Amy ever make the perfect bao?"--publisher

by Wenjun Qin and Xun Liu

"A little girl with a vivid imagination ventures into the garden after it has rained and discovers its beauty. Full of imagination, she enjoys a stroll and encounters many of the creatures that call the garden home. A smartly dressed earthworm, the lazy sun, a shy raccoon, a dancing butterfly. There is so much for her to see. This beautifully illustrated story will make readers appreciate the small wonders of nature"--Provided by publisher

How to Solve a Problem

by Ashima Shiraishi and Yao Xiao

"From Ashima Shiraishi, one of the world’s youngest and most skilled climbers, comes a true story of strength and perseverance—in rock climbing and in life. To a rock climber, a boulder is called a “problem,” and you solve it by climbing to the top. There are twists and turns, falls and scrapes, and obstacles that seem insurmountable until you learn to see the possibilities within them. And then there is the moment of triumph, when there’s nothing above you but sky and nothing below but a goal achieved. Ashima Shiraishi draws on her experience as a world-class climber in this story that challenges readers to tackle the problems in their own lives and rise to greater heights than they would have ever thought possible." -- publisher

I have a little lantern / Wo you yi zhan deng long

The little girl left for school at dawn. On her way to school, she met a little spider, a little squirrel, a little hedgehog and a little panda. They were all afraid of the darkness and wondering if monsters were hiding in every corner. Only the little girl was not scared, because she had a little magic lantern. They held hand-in-hand so that nobody would be scared.

by Lee and Komako Sakai

Hina and her mother adopt a tiny stray kitten that turns up on their doorstep, but when one day the kitten goes missing, Hina frantically searches for her new pet. 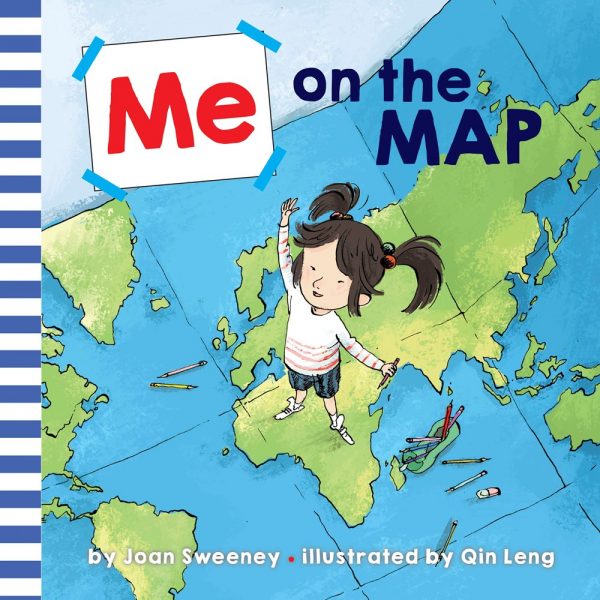 Me on the map

by Joan Sweeney and Qin Leng

"In this playful introduction to maps and geography, step by simple step, a young girl shows readers herself on a map of her room, her room on the map of her house, her house on the map of her street--all the way to her country on a map of the world. Once the reader is familiar with the maps, she demonstrates how readers can find their own country, state, and town--all the way back to their room"- -Provided by publisher

This colorfully illustrated multicultural children's book presents an entertaining story from the Philippines that teaches an important lesson about self-esteem. A heart- warming story of a young Filipino girl who builds self- confidence after spending a day with her classmates, Pan de Sal Saves the Day: A Filipino Children's Story is an award-winning inspiring tale for young children everywhere. It's the story of a young girl named Pan de Sal who lives in the Philippines and thinks she's the unluckiest girl in the whole world. Aside from not liking her own name and finding her appearance strange, she doesn't have all the fancy things her classmates have. She can't even muster the courage to try out for the Glee Club, even though she has a beautiful voice. Things change suddenly when an unexpected event forces her into the limelight. With her innate talent and resourcefulness, Pan de Sal wins admiration of her classmates and finds the confidence she needs to fulfill her dreams. For anyone who has ever felt like an outsider or experienced adversity, Pan de Sal Saves the Day teaches children to see the unique qualities in everything and everyone, even themselves

by Jerry Zhang and Trisha Hautéa

Join Pepper Zhang, as she transforms from ordinary toddler into world-famous artist in the first book of the Pepper Zhang series. --publisher

A morning with Grandpa

by Sylvia Liu and Christina Forshay

Curious and energetic Mei Mei attempts some t'ai chi forms as her grandfather demonstrates them, then tries to teach him basic yoga poses. Includes introductions to t'ai chi and yoga, as well as instructions for the exercises described in the text

When the cousins came

Even though Lila's cousins do some things differently, Lila loves when they come to visit.

Danbi is thrilled to start her new school in America. But a bit nervous too, for when she walks into the classroom, everything goes quiet. Everyone stares. Danbi wants to join in the dances and the games, but she doesn't know the rules and just can't get anything right. Luckily, she isn't one to give up. With a spark of imagination, she makes up a new game and leads her classmates on a parade to remember.

Eyes That Kiss in the Corners

A young Asian girl notices that her eyes look different from her peers'. They have big, round eyes and long lashes. She realizes that her eyes are like her mother's, her grandmother's, and her little sister's. They have eyes that kiss in the corners and glow like warm tea, crinkle into crescent moons, and are filled with stories of the past and hope for the future. Drawing from the strength of these powerful women in her life, she recognizes her own beauty and discovers a path to self-love and empowerment. This powerful, poetic picture book will resonate with readers of all ages

Driving through Ohio in an old Pontiac, a young girl's parents stop suddenly when they spot watercress growing wild in a ditch by the side of the road. Grabbing an old paper bag and some rusty scissors, the whole family wades into the muck to collect as much of the muddy, snail covered watercress as they can. At first, she's embarrassed. Why can't her family get food from the grocery store? But when her mother shares a story of her family's time in China, the girl learns to appreciate the fresh food they foraged. Together, they make a new memory of watercress.

In addition to reading titles like these, children need support and guidance that interrupts negative messages about Asian Americans. Here are two resources to consider as you engage in conversations with the children you share books with: