Karen Wang is our summer 2020 Diverse BookFinder intern. She is a graduate student at Pratt Institute, pursuing a Master of Library and Information Science to become a children’s librarian. Before transitioning to librarianship, Karen worked in the K-12 educational technology field, developing and implementing programs for students, families, and educators across the country. Karen is also a long-time children’s book volunteer at Housing Works Bookstore in New York City, and co-founded the website Kidsmomo.com for young readers ages 8-13.

August 26th is Women’s Equality Day -- a commemoration of the official certification of the 19th Amendment, which granted women the right to vote. Now, 100 years later, more than 68 million women in the U.S. vote in elections thanks to the brave and persistent suffragists who fought tirelessly for the cause. However, we must remember that while white women benefited, not all women won access to the ballot when the 19th Amendment was adopted in 1920.

We must remember that while white women benefited, not all women won access to the ballot when the 19th Amendment was adopted in 1920.

Black and Indigenous women and Women of Color were essential to the suffrage movement, yet they were often denigrated by their white counterparts and have been mostly erased in the mainstream historical narrative—even as their disenfranchisement continued for decades. It wasn’t until 1924 that the Indian Citizenship Act passed. Asian Americans were not granted the right to become citizens until the Immigration and Nationality Act of 1952. It wasn’t until the Voting Rights Act of 1965 that the federal government formally prohibited Jim Crow tactics and policies designed to prevent Black Americans from voting. And it took 10 more years for the Voting Rights Act to be expanded in 1975 to protect the voting rights of language minorities (including persons of Hispanic heritage and Alaskan natives). Unfortunately, BIPOC in the U.S. continue to face various forms of voter suppression today, from North Dakota’s voter ID laws affecting Native Americans without physical addresses, to the purging of voter rolls in states like Georgia and Wisconsin.

Black and Indigenous women and Women of Color were essential to the suffrage movement, yet they were often denigrated by their white counterparts and have been mostly erased in the mainstream historical narrative—even as their disenfranchisement continued for decades.

So in honor of Women’s Equality Day 2020, we not only celebrate the 100th anniversary of the 19th Amendment, but we also honor the courageous and determined Black and Indigenous women and Women of Color who were crucial to that victory—and who have continued the ongoing fight for equality and expanded voting rights over the last century. Below are picture book recommendations to uplift just some of their stories with the children in your lives.

We honor the courageous and determined Black and Indigenous women and Women of Color who were crucial to that victory—and who have continued the ongoing fight for equality and expanded voting rights over the last century.

Stories of BIPOC women in the fight for equality

by Jonah Winter and Shane Evans

As an elderly woman, Lillian recalls that her great-great- grandparents were sold as slaves in front of a courthouse where only rich white men were allowed to vote, then the long fight that led to her right--and determination--to cast her ballot since the Voting Rights Act gave every American the right to vote

by Nikki Grimes and Michele Wood

In this imaginative biographical story, Harriet Tubman and Susan B. Anthony sit down over a cup of tea in 1904 to reminisce about their struggles and triumphs in the service of freedom and women's rights.

Justice has grown up witnessing the many ways her grandma serves the community. She wants to make a difference in the world, too, but how? Isn't she too young? Through conversations with her grandma and their shared love of books, Justice learns about important women and men throughout history who changed the world: Ella Baker, Shirley Chisholm, Charles Hamilton Houston, Dr. Wangari Maathai, Paul Robeson, and Ida B. Wells. Justice learns how each leader was a champion for advancing justice and improving the world, and she dreams of becoming a change maker, too.--Book jacket

And coming soon to our collection:

For older children, we’d also suggest these books that include profiles of diverse leaders in the fight for the women’s suffrage:

Even with the informative and thought-provoking books listed above, it’s worth noting that many diverse voices and communities in the suffrage movement are still absent or underrepresented in children’s literature. The enduring legacies of Sojourner Truth, Ida B. Wells, and Harriet Tubman should never be diminished—but what do we miss when so many children’s books focus on just a few luminaries?

Many diverse voices and communities in the suffrage movement are still absent or underrepresented in children’s literature.

For example, we would love to see picture books about Native activist Susette LaFlesche Tibbles, who fought for both women’s suffrage and Native American citizenship rights; and about Frances Ellen Watkins Harper, a Black suffragist and abolitionist who co-founded the National Association of Colored Women. Similarly, picture books would be a wonderful medium for telling the story of Chinese-American suffragist and Baptist minister Mabel Ping-Hua Lee, who at the age of 16 led the biggest parade in history to promote women’s suffrage in 1912. And we could certainly envision a picture book portrayal of Jovita Idár, who used her family newspaper to espouse women’s suffrage and Mexican-American rights—and who single-handedly blocked one attempt by Texas Rangers to enter their headquarters and shut down the presses.

Our hope is to see more picture books in the future that highlight these and other women of color who were instrumental to the women’s suffrage movement, but are less well-known. In the meantime, you might explore online selections from the Smithsonian’s exhibit “Votes for Women: A Portrait of Persistence” to supplement your readings of the currently available picture books on the subject. The exhibit’s digital selections include information about some of the leaders mentioned above, and the exhibit as a whole locates the battle for women’s suffrage within the larger ongoing struggle for equality in America.

Books about voting and elections

If you also want to build children’s understanding of our country’s electoral system more generally, check out the titles below. You can use these books to enhance background knowledge and help kids reflect on the importance of everybody safeguarding—and consistently using—their hard-won right to vote: 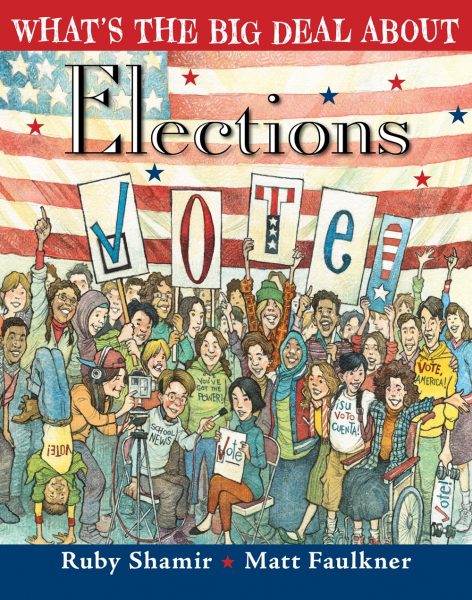 What’s the big deal about elections

by Ruby Shamir and Matt Faulkner

Describes how Americans choose leaders, local and federal, and why elections should matter.

Using a campaign for mayor as an example, shows the steps involved in an election, from the candidate's speeches and rallies, to the voting booth where every vote counts, to the announcement of the winner

When Grace discovers that there has never been a female U.S. president, she decides to run for school president

"When Grace learns about the three branches of the United States government, she and the rest of the student council put the lesson into practice as they debate how to spend the money from a school fund-raiser. The arguments continue as they travel to Washington, DC, for a field trip. Grace feels closer than ever to her dream of becoming president someday, but she and her classmates have a lot to learn about what it means to serve the needs of the people, especially when the people want such different things!" -- publisher