This is the first post in a series sharing data from our collection that identifies significant gaps in representation of BIPOC characters in picture books.

Of the 3182 picture books in our collection, 576 titles feature Asian/Pacific Islander/Asian American characters. Only 61 of these titles are biographies, 17 of which feature Americans. This means that only 0.5% of diverse picture books on the market feature the lived achievements and contributions of Asian and Pacific Islander Americans.

Furthermore, considering the diversity of AAPI peoples — including more than 50 countries and territories of origin — it’s troubling to see that only four are represented in picture book biographies with AAPI characters. *Note: The following books vary in terms of quality -- so not all of these are necessarily recommended titles.

As a child, Maya Lin loved to study the spaces around her. She explored the forest in her backyard, observing woodland creatures, and used her house as a model to build tiny towns out of paper and scraps. The daughter of a clay artist and a poet, Maya grew up with art and learned to think with her hands as well as her mind. From her first experiments with light and lines to the height of her success nationwide, this is the story of an inspiring American artist: the visionary artist-architect who designed the Vietnam Veterans Memorial. -- publisher

Tie Sing was born in the mountains. The mountains were in his blood. But because he was of Chinese descent at a time in America when to be Chinese meant working in restaurants or laundries, Tie Sing's prospects were limited. But he had bigger plans. He began cooking for mapmakers and soon built a reputation as the best trail cook in California. When millionaire Stephen Mather began his quest to create a national park service in 1915, he invited a group of influential men -- writers, tycoons, members of Congress, and even a movie star -- to go camping in the Sierras. Tie Sing was hired to cook. Tie Sing planned diligently. He understood the importance of this trip. But when disaster struck -- twice! -- and Tie Sing's supplies were lost, it was his creative spirit and quick mind that saved the day. His sumptuous menus had to be struck and Tie Sing had to start over in order to feed the thirty people in the group for ten whole days. His skills were tested and Tie Sing rose to the challenge. On the last night, he fed not just the campers' bodies, but also their minds, reminding them to remember and protect the mountains

A biography of Isamu Noguchi, Japanese American artist, sculptor, and landscape architect, focusing on his boyhood in Japan, his mixed heritage, and his participation in designing and building a home that fused Eastern and Western influences. Includes an afterword about Noguchi's adult life and works, plus photographs.--Provided by publisher

Yuriko, teased at school for her unusual name and Japanese ancestry, yearns to be more ordinary until her father reminds her of how special she is

A Japanese American man recounts his grandfather's journey to America which he later also undertakes, and the feelings of being torn by a love for two different countries

An elegant picture book biography that portrays the most moving moments in the life of Gyo Fujikawa, a groundbreaking Japanese American hero in the fight for racial diversity in picture books. Growing up in California, Gyo Fujikawa always knew that she wanted to be an artist...During World War II, Gyo’s family was forced to abandon everything and was taken to an internment camp in Arkansas. Far away from home, Gyo worked as an illustrator in New York while her innocent family was imprisoned. Seeing the diversity around her and feeling pangs from her own childhood, Gyo became determined to show all types of children in the pages of her books. There had to be a world where they saw themselves represented. -- publisher

After growing up near San Francisco, a young Japanese woman returns with her parents to their native Japan, but she feels foreign and out of place 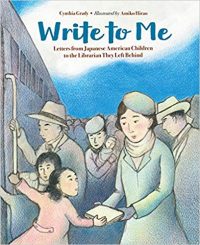 by Paula Yoo and Dom Lee

So who's missing here, you ask? Well, everyone else.

There's some great news in AAPI representation, though, in the form of brand-new anthologies. Three came out last year, one is forthcoming, and they are game-changers in the field of Asian and Pacific Islander American biography, specifically created and published independently by AAPI authors and illustrators to fill the void outlined above. Cumulatively, these titles offer child readers the opportunity to discover the lives of more than 70 AAPI people and their significant contributions to America:

With these collections as a foundation, we hope to see an increase in AAPI biographies, one entire picture book after another, each dedicated to exploring the experiences and impact of an individual, remarkable American.