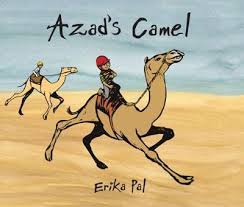 When Jouha counts the ten donkeys carrying his dates to market, he repeatedly forgets to count the one he is riding on, causing him great consternation. Includes numbers written out in Arabic and in English transliteration, as well as the numerals one through ten, and a note on the origins and other versions of the story.

When the animals saved Earth

The trial of the millennium: animals vs humans. Brought before the spirit king, and charged by the animals with spreading fear and pain throughout the land, the humans must answer for their actions. Will justice be had? Will balance return to land, sea, and sky? Will the earth be saved?

by Taghreed Najjar and Hassan Manasra

"A story about facing your fears and accepting differences, inspired by Arabic folk tales. The villagers are afraid of the "Ghoul." For years, they've tiptoed around the village for fear of disturbing it. The monster doesn't look like them, and it is believed to eat humans. One day, the brave Hassan embarks on a dangerous mission to face the long-feared Ghoul. When Hassan finally meets the Ghoul living on top of the mountain, he discovers that the Ghoul is just as terrified of people as they are of him. Hassan and the Ghoul realize that they can still be friends, despite their differences. A beautifully illustrated story that can be used as a springboard to discuss how we perceive those who are different and how our fears and prejudices may be built on false assumptions." -- publisher