A colorful folktale about the natural world by a renowned Chicano writer. Little Crow and Father Crow sit on the branch of a tall tree surveying the freshly planted corn field. Father Crow tells Little Crow that the human father and son they see working in the fields do a lot for crows. They plant corn, they move water, and they feed the crows with their fields. The crows sing their gratitude to the farmers, but in spite of their efforts to sing their best songs, the farmers don't like the crows. As they watch, the tricky farmer bends to get a rock. He hides it by the side of his leg, and when they get in close range, the farmer launches his missile at the crows. But Little Crow and Father Crow are much too fast for him. They fly overhead, laughing and singing. Other crows are not so lucky, like Uncle Fly-Too-Late whose wing was broken when a farmer threw a rock. Little Crow is troubled. What if the farmer picked up a rock when Little Crow wasn't looking? What if Little Crow couldn't get away fast enough? Soon, Little Crow has an idea that just might save all the crows.

After the death of her mother and father, Adelita is badly mistreated by her stepmother and stepsisters until she finds her own true love at a grand fiesta.

by Tato Laviera and Gabhor Utomo

A Mayan prince dreams that children of different countries join him for an adventure, and when he is named king, he declares all the children of the hemisphere to be members of his tribe.

In this version of a traditional tale, Senor Calavera arrives unexpectedly at Grandma Beetle's door. He requests that she leave with him right away. "Just a minute," Grandma Beetle tells him. She still has one house to sweep, two pots of tea to boil, three pounds of corn to make into tortillas--and that's just the start! Using both Spanish and English words to tally the party preparations, Grandma Beetle cleverly delays her trip and spends her birthday with a table full of grandchildren and her surprise guest. This spirited tribute to the rich traditions of Mexican culture is the perfect introduction to counting in both English and Spanish. The vivacious illustrations and universal depiction of a family celebration are sure to be adored by young readers everywhere

by Caroline McAlister and Stefan Czernecki

A retelling of the traditional Mexican tale explaining the origins of molé, the savory sauce containing chocolate that is served over turkey or chicken

By following her mother's admonition to perform every task with care and love, a poor young Mexican girl wins the devotion of the governor's son 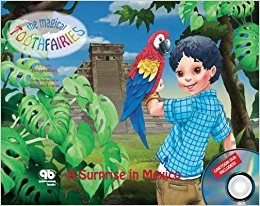 by Henry Olberg and Swetlana Loutsa

Have you ever heard the story of La Llorona, the ghost woman they say is crying and crying for her children? Some people say she cries along the river, while others think they've heard her in the desert, or down an alley right near their house. But almost everyone agrees the La Llorona is not a lady you want to meet late at night, when you're out past your bedtime. Then you might learn more about her than you ever wanted to know!--Container