by Heather Smith and Rachel Wada

"This gorgeously illustrated picture book tells the story of a young Japanese boy who loses his dad in a tsunami."--

A wealthy man in a Japanese village, whom everyone calls Ojiisan, which means grandfather, sets fire to his rice fields to warn the innocent people of an approaching tsunami.

Twelve-year-old Lee, an orphan, reluctantly leaves his grandparents in China for the long sea voyage to San Francisco, where he and other immigrants undergo examinations at Angel Island Immigration Station.

The Story of Chopsticks

When Kùai cannot get enough to eat, he begins using sticks to grab food too hot for the hands, and soon all of China uses Kùai zi, or chopsticks. Includes a cultural note and a recipe for rice pudding.

The story of paper

After the Kang brothers get in trouble at school, they devise a way to make paper, which will make things easier for both their teacher and themselves. Includes a historical note and a recipe for home-made paper. 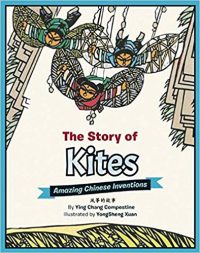 The story of kites

Long ago in China, three brothers become tired of chasing birds from their family's rice fields and experiment with ways to make the job easier. Includes a historical note and instructions for making and flying a kite.