Mr. Mergler, Beethoven, and me

by David Gutnick and Mathilde Cinq-Mars

"An elderly piano teacher takes a young music student under his wing and changes her life. This story is inspired by events in the life of Daniel Mergler - a wonderful musician who loved to teach and whose generous spirit inspires author and journalist David Gutnick to this day.

by Patricia McCarthy and Hwei Lim

"Jon loves his life in the North. But when he feels a pain that won't go away, he must go to a children's hospital in the south to find out what is wrong. A doctor there tells Jon he has cancer and will have to stay at the hospital for a while. Suddenly Jon's life is upside down! But with a handful of tricks from the doctors and nurses, and new friends, Jon discovers ways to cope with some of the tricky parts of having cancer. Accompanied by a resource guide for parents and caregivers, including hospital and support information, Jon's Tricky Journey opens a conversation between Inuit children facing a cancer diagnosis and their families to help make a difficult and confusing time more manageable"--|cProvided by publisher

I am not a number

"A picture book based on a true story about a young First Nations girl who was sent to a residential school. When eight-year-old Irene is removed from her First Nations family to live in a residential school she is confused, frightened, and terribly homesick. She tries to remember who she is and where she came from despite the efforts of the nuns to force her to do otherwise. Based on the life of Jenny Kay Dupuis' own grandmother, I Am Not a Number brings a terrible part of Canada's history to light in a way that children can learn from and relate to"--|cProvide by publisher 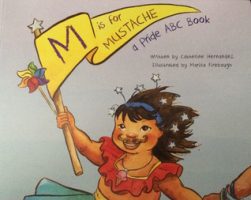 M is for mustache

It's Pride Day, and this big loving chosen family is ready to celebrate! See what they do to make their Pride Day special and so much fun--one letter at a time! --Page 4 of cover

When I was eight

Based on the true story of Margaret Pokiak-Fenton, this book chronicles the unbreakable spirit of an Inuit girl while attending an Arctic residential school. Olemaun is eight and knows a lot of things. But she does not know how to read. Ignoring her father’s warnings, she travels far from her Arctic home to the outsiders’ school to learn. The nuns at the school call her Margaret. They cut off her long hair and force her to do menial chores, but she remains undaunted. Her tenacity draws the attention of a black-cloaked nun who tries to break her spirit at every turn. But the young girl is more determined than ever to learn how to read.

Spending his childhood summers on Campobello Island, young Franklin Delano Roosevelt learns how to canoe from Tomah Joseph, a respected fishing and canoe guide, basketmaker and canoe-builder, and former chief of his tribe, who also teaches Franklin about the Passamaquoddy culture.