by Neil Gaiman and Divya Srinivasan

Cinnamon was a princess, a long time ago, in a small hot country, where everything was very old. Cinnamon did not talk. Mango trees, a parrot, and a beautiful room in the palace do nothing to help the teachers who try to make her to speak. Can a man-eating tiger do so, and exactly who will end up in the belly of the beast?

A retelling of a traditional Bengali tale in which a kind and generous Indian barber, pressed by his father and then his wife to earn more money, cleverly persuades a ghost to bring him riches

"A little boy begins taking yoga lessons at the zoo, where he learns that he can mimic the animals there with simple yoga poses"--|cProvided by publisher

by Elizabeth Suneby and Suana Verelst

Razia dreams of getting an education, but in her small Afghan village, girls have not been allowed to attend school for many years. When a new girls' school opens in the village, Razia must convince her family to let her attend

Waiting for the Owl’s Call 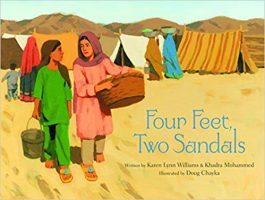 Based on a true story. After her parents are taken away by the Taliban, young Nasreen stops speaking. But as she spends time in a secret school, she slowly breaks out of her shell.

Impressed by a poor Jewish shoemaker's belief that God will ensure everything turns out as it should, a shah in Kabul, Afghanistan, devises a series of hardships to test the man's faith