Falling asleep wondering why he doesn't have a fur coat like the stuffed animals on his bed, Noah dreams that these animals are real and each explains the unique qualities of their fur to him.

by Ishta Mercurio and Jen Corace

First, Nanda's entire world is the circle of her mother's arms but as she grows, she sees the wonder of whirligigs, fractals in the snow, and even the circle of the Earth, itself. 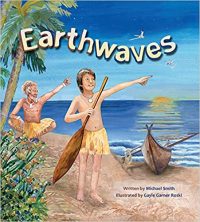 by Wenjun Qin and Xun Liu

"A little girl with a vivid imagination ventures into the garden after it has rained and discovers its beauty. Full of imagination, she enjoys a stroll and encounters many of the creatures that call the garden home. A smartly dressed earthworm, the lazy sun, a shy raccoon, a dancing butterfly. There is so much for her to see. This beautifully illustrated story will make readers appreciate the small wonders of nature"--Provided by publisher

by Komal Singh and Ipek Konak

"Ara loves big numbers--BIG numbers. She wants to program her droid DeeDee <Beep!> to count all the stars, but she's not sure how. In this upbeat adventure, Ara visits Innovation Plex to enlist the help of four tech trailblazers--inspiring real-life engineers of Google. With her new friends, Ara discovers an algorithm for success that can solve BIG problems and be lots of fun: courage, creativity, code, and collaboration. </Beep!>, "- -Page 4 of cover

Iqbal and his ingenious idea

by Elizabeth Suneby and Rebecca Green

It's monsoon season in Bangladesh, and that means Iqbal's mother must cook indoors over an open flame, even though the smoke is making her and the family sick. When Iqbal learns about the district science fair, with the theme of sustainability, he is determined to win first prize. With the cash reward, he can buy a pipe stove that draws smoke out of the house. Then Iqbal is struck with an ingenious idea! For his science fair project, he will build a cook stove that doesn't produce smoke. He researches solar cookers and finds the winning design - one that harnesses the sun's energy and do away with those harmful fumes. But the competition at the science fair is fierce - will Iqbal bring home the prize? Award-winning author Elizabeth Suneby offers a child-centered look at a global health problem that affects more than three billion people. |cProvided by publisher

by Chitra Soundar and Kanika Nair

When his daughter loses her kite on the way to the annual kite-flying festival, Farmer Falgu must come up with a clever solution.

A river winds through the landscape, eroding the rock for millions of years, shaping a cavity in the ground 277 miles long, as much as 18 miles wide, and more than a mile deep known as ... Grand Canyon. Home to an astonishing variety of plants and animals that live within its walls, Grand Canyon is much more than just a hole in the ground. Follow a father and daughter as they make their way through this wondrous place, discovering life both present and past. Weave in and out of time as perfectly placed die cuts show how a fossil today was a living creature millions of years ago, often in a completely different environment.

Braden and Finley accompany their father, a wildlife biologist, when he tags a bear that has just had cubs and later, use the tag to find her again in hopes she will adopt an orphaned cub.