"Brings together the work of fourteen award-winning poets and sixteen illustrators of diverse backgrounds who share aspects of their childhood experiences in honest portraits of what it was like for them growing up in the United States...Together these heartfelt poems and captivating illustrations shine a light on the rich diversity of people in our nation as well as the timeless human connections and universal experiences we all share." -- publisher

Illustrated story of a young child who questions the significance of skin color.

Can I touch your hair?

Irene Latham, who is white, and Charles Waters, who is black, present paired poems about topics including family dinners, sports, recess, and much more. This relatable collection explores different experiences of race in America.

All the colors we are / Todos los colores de nuestra piel

by Katie Kissinger and Chris Bohnhoff

Explains, in simple terms, the reasons for skin color, how it is determined by heredity, and how various environmental factors affect it. 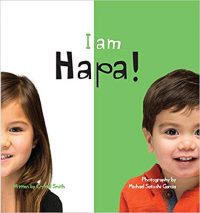 With delightful photographs, I am Hapa encourages children to look within themselves and appreciate the diverse cultures and ethnicities that make each person special. I am Hapa is the first trilingual children's book in English, Spanish and Chinese, celebrating the multiracial and multicultural experience.

by Julius Lester and Karen Barbour

The author introduces the concept of race as only one component in an individual's or nation's "story."

by Paula Yoo and Dom Lee