While visiting the science museum with his mother and sister, Jojo finds himself on a journey through space as the retired space shuttle Endeavour describes her missions and the people involved. Includes "fun facts" about Endeavour, "famous firsts" of five space shuttles, quizzes, and a glossary.

by Deborah Underwood and Meg Hunt

In this outer space adaptation of the fairy tale in rhyme, Cinderella dreams of becoming a spaceship mechanic.

The skies above my eyes

by Charlotte Guillain and Yuval Zommer

A book made up of one long page explores what goes on above the Earth, from high rise buildings up to the Kuiper Belt on the outer edges of the Solar System. 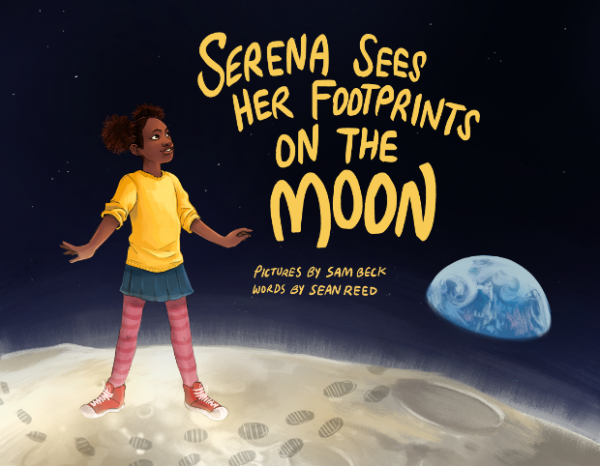 Serena sees her footprints on the Moon

by Sean Reed and Sam Beck

A girl imagines leaving her footprints on the Moon next to the ones left by the twelve astronauts who walked there.

Mae among the stars

by Roda Ahmed and Stasia Burrington

Mae wanted to be an astronaut. She dreamed of dancing in space. She imagined herself surrounded by billions of stars, floating, gliding, and discovering. Her parents encouraged her, saying, "If you believe it, and work hard for it, anything is possible." This encouragement, along with Mae's own curiosity, intelligence, and determination, paved the way for her to become the first African American woman to travel in space--|cAdapted from publisher's description

The moon over Star

In July 1969, the world witnessed an awe-inspiring historical achievement when Neil Armstrong and Buzz Aldrin became the first humans to set foot on the moon. For the young protagonist of this lyrical and hopeful picture book, that landing is something that inspires her to make one giant step toward all of the possibilities that life has to offer. Caldecott Honor-winning painter Jerry Pinkney and the poetic Dianna Hutts Aston create a moving tribute to the historic Apollo 11 Mission, just in time to commemorate its upcoming fortieth anniversary--From the publisher

If I were an astronaut

by Eric Braun and Sharon Harmer

Discusses activities astronauts do while they're in space