It is winter and the people are starving. There are no fish. They must seek the help of a medicine man to save them. The Old Man with the Otter Medicine tells of medicine power, the struggle for survival and an important part of the history and culture of the Dene people as it has been passed down through stories and legends for generations. --publisher

Robert, a young man with HIV, returns to his Native community to attend a gathering and to speak to his people about his disease. The two children in the story learn about traditional Native culture while they learn about Robert's disease.

by Darryl Baker and Qin Leng

"Jake cannot wait for his uncle to meet Kamik, and to see what an obedient puppy he is becoming! Jake's uncle is a great musher, who has won many dogsledding races, and if Kamik is good enough Jake hopes today might be the day that Kamik finally gets to run with a dog team!"--Back cover

Susan and her sister, Rebecca, love watching their mother write letters to people in other camps. Their mother has one precious pencil, and she keeps it safe in her box for special things. One afternoon, Anaana leaves the iglu to help a neighbour, and Susan, Rebecca, and their brother Peter are left with their father. They play all their regular games but are soon out of things to do-until Ataata brings out the pencil! As Susan draws and draws, the pencil grows shorter and shorter. What will Anaana think when she comes home? Based on author Susan Avingaq's childhood memories of growing up in an iglu, this charming story introduces young readers to the idea of using things wisely. |cProvided by publisher

Simonie and the dance contest

Simonie loves to dance! When he sees a sign for Taloyoak's annual Christmas Jigging Dance Contest, he can't wait to enter. But practicing is hard work, and Simonie starts to worry that he won't do a good job in front of all his friends and neighbors. Luckily, with a little advice from his anaana and ataata, and some help from his friends Dana and David, Simonie learns how to listen to the music and dance the way it makes him feel. When the time comes for the contest, he's ready to dance his very best. Based on the annual Christmas dance contest in the community of Taloyoak, Nunavut, this heartwarming picture book shows how a lot of hard work-and a little inspiration-can go a long way. |cProvided by publisher

When we were alone

by David Robertson and Julie Flett

When a young girl helps tend to her grandmother's garden, she begins to notice things that make her curious. Why does her grandmother have long, braided hair and beautifully colored clothing? Why does she speak another language and spend so much time with her family? As she asks her grandmother about these things, she is told about life in a residential school a long time ago, where all of these things were taken away. When We Were Alone is a story about a difficult time in history, and, ultimately, one of empowerment and strength. |cProvided by publisher 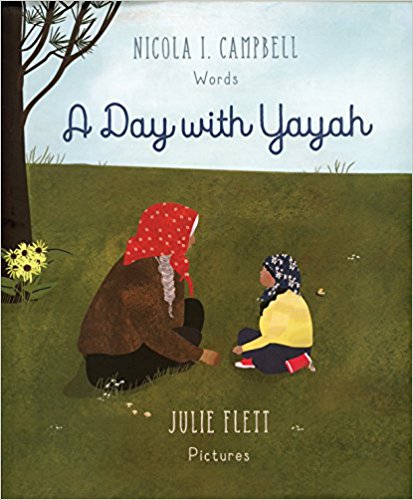 A day with Yayah

by Nicola I. Campbell and Julie Flett

On an outing in Nicola Valley, British Columbia, a First Nations family forages for herbs and mushrooms while the grandmother passes down her language and knowledge to her young grandchildren. Includes glossary.