by Claudia Harrington and Zoe Persico

My First-Generation Family is the story of a normal day in Manny's life. When classmate Lenny visits his home, he discovers Manny's family moved here from Mexico. Who picks up Manny from school in a taxi? Papa! Who brings home dinner from her restaurant job? Mama! Who reads Manny's bedtime story? Mama and Papa! Lenny realizes love makes a family. -- Goodreads.com

Juan lives in Mexico, where his family owns a taco restaurant. When Juan goes to the Cinco de Mayo festival, he meets a tourist family that speaks another language. Juan takes the tourists to his family's restaurant and spends the day with them. Readers will learn about Mexican culture and cuisine as Juan shows the tourists the best attractions and offers them the tastiest food

by Pat Mora and Libby. Martinez

"Libby and her great-aunt, Lobo, both learn the Pledge of Allegiance--Libby for school, and Lobo for her U.S. citizenship ceremony"-- 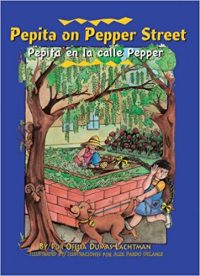 Pepita, unhappy about her family's move to a street where everything is new to her, is not very friendly to her neighbors as they pass by, but later has another chance to make friends.