A bilingual story, inspired by the childhood of Valentina Cruz, whose family was one of the first permanent inhabitants of the Galapagos islands. Valentina makes a promise to protect the islands and her animal friends.--Provided by publisher

After a while crocodile

Alexa and the other children at her rural school in Costa Rica have a special project: they are raising American Crocodiles and returning them to the wild. End notes discuss the physical characteristics and conservation of crocodiles

Ali and the spider

"Join Ali as he overcomes his fear of spiders and discovers their usefulness, in today's world as well as during the lifetime of the Prophet Muhammad"--Back cover 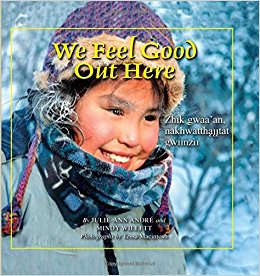 We feel good out here

Julie-Ann Andre is a Gwichya Gwich'in from Tsiigehtchic in the Northwest Territories. She is a Canadian Ranger, a mother of twin daughters, a hunter, a trapper, and a student. In We Feel Good Out Here, Julie-Ann shares her family's story and the story of her land Khaii luk, the place of winter fish. As Julie-Ann says, "The land has a story to tell, if you know how to listen. When I travel, the land tells me where my ancestors have been. It tells me where the animals have come and gone, and it tells me what the weather may be like tomorrow." Her home is an important part of who Julie-Ann is. She wants to help make sure that her environment is healthy, so it can continue to tell its story to her children and their children. ~from publisher

A walk on the tundra

Inuujaq learns about local plants while walking on the tundra with her grandmother.