by Imogen Greenberg and Isabel Greenberg

"Who were the Aztecs? Why did they build their temples? When did they discover chocolate? And what was daily life like in Mesoamerica? Find out in this fact-filled book, with map and timeline, which makes 500 years of history visible at a glance"--Back cover

Uncle Monarch and the Day of the Dead

Upon the death of her beloved Tio Urbano, who has taught her that monarch butterflies are the souls of the dead, young Lupita gains a deeper understanding of Dia de los Muertos, the Day of the Dead, as it is observed in rural Mexico. Includes glossary of Spanish terms and facts about the Day of the Dead.

Each day Chrislove asks his friend Josias when he will "hold the book,"; or join them at school, but Josias can only think of tending the bean garden so that his family will have enough food

After a while crocodile

Alexa and the other children at her rural school in Costa Rica have a special project: they are raising American Crocodiles and returning them to the wild. End notes discuss the physical characteristics and conservation of crocodiles

Retells animal folktales from five indigenous peoples of Mexico, including the Tarahumara tale in which a puma meets a grasshopper, and provides information on the culture of each indigenous people. 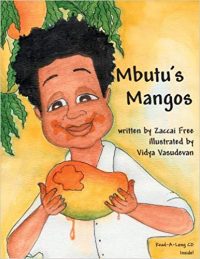 by Zaccai Free and Vidya Vasudevan

"Hi, I'm Mbutu. I live in a small, quiet village with my mother and father. I love the people and sounds of my village and I especially love mango season. Have you ever had a mango? It is so good, juicy, and sweet. Mango season is my favorite time of year. That's why the story is called Mbutu's mangos. It's all about my adventures during mango season when I try to save the mangos from falling on the ground and rotting. I learned a lot that mango season, so I'm sharing my story with you"--Back cover

Eleven-year-old Maria Luz and her family have a small farm in Honduras, but may not have enough food to sustain them for the year, so Maria's father must leave home to find work, leaving her in charge of the garden