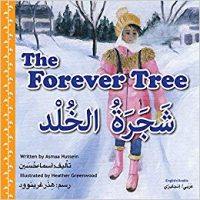 by Asmaa Hussein and Heather Greenwood

In the midst of a cold, gloomy winter day, Zainab and her classmates long for the full bloom and radiant warmth of summer. They all miss the hot sun, the full trees, and the outdoor adventures that summer brings. While they take turns describing their favourite trees and pastimes, Zainab listens attentively. She decides she has a completely different tree in mind – a tree unlike any other. A tree that can be found in only one place: Paradise. --publisher's site

by Billy Aronson and Jennifer Oxley

Peg and Cat are visiting their friends Yasmina and Amir during a very special holiday, Eid al-Adha. Everyone is excited to don their best duds, exchange presents, and eat a yummy feast divided into equal parts--one-third for family, one-third for friends and neighbors, and one-third for those in need. But Cat isn't so sure about giving all that deliciousness away. Can more generosity and less honey cake equal happiness for Cat? Eid Mubarak!--Book summary