"It's time to go to market, so Nasreddine loads up the donkey and sets off with his father. But when onlookers criticize his father for riding while Nasreddine walks, the boy is ashamed. The following week, Nasreddine persuades his father to walk, and let him ride — but then people criticize the boy for making his father walk! No matter what Nasreddine tries, it seems that someone always finds something to disapprove of. Nasreddine is a legendary character popular in stories told throughout the Middle East, and this clever story will bring him to a new audience. Accompanied by stunning artwork, this tale offers a gentle reminder to readers that it isn't always necessary to listen to the world's criticisms." -- publisher 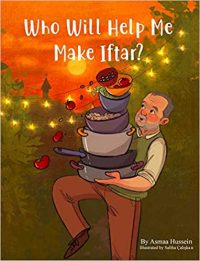 Who will help me make iftar?

Mustafa Amca and his wife have a yearly tradition - they cook iftar for their friends and neighbours on the first day of Ramadan. This year, Mustafa Amca's wife is sick and can't help him cook! Will he be able to find others to pitch in and create a meal for everyone to enjoy? A wonderful, rich story about selflessness and generosity! --publisher's site

How the Queen Found the Perfect Cup of Tea

by Kate Hosford and Gabi Swiatkowska

A pampered queen sets out in a hot air balloon with her butler, James, in search of the perfect cup of tea and after stopping in Japan, India, and Turkey, she returns home knowing exactly what she has been missing. 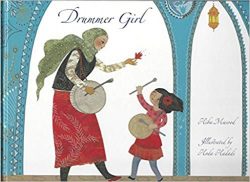 by Hiba Masood and Hoda Hadadi

Year after year, in the blessed month of Ramadan, little Najma has happily arisen to the drum beat of her neighborhood's musaharati. He walks through the streets of her small Turkish village, waking each family for the pre-dawn meal before the long day of fasting. Najma wants nothing more than to be a musaharati herself one day, but no girl has ever taken on the role before. Will she have what it takes to be the drummer girl of her dreams? Find out in this inspirational story of sincerity, determination, and believing in yourself.

The Amazing Travels of Ibn Battuta

by Fawzia Gilani and Shireen Adams

"The pure Snow White and the poisonous Stepmother are back in this well-crafted retelling of the classic fairy tale. Involving the power of a djinn, poisoned dates, seven dwarf sisters-in-faith, and a mysterious old peddler woman in the woods wearing a face veil, this lyrically told story offers a unique twist on this fairy tale, whilst keeping the classic much-loved story intact, including a hateful and vain stepmother, a considerate huntsman, and a charming prince. Set in the heady snow-strewn woodlands of Anatolia by the illustrator Shireen Adams, this tale of flight, friendship, and forgiveness is richly detailed and beautifully brought to life. Snow White is the second book in the Islamic Fairy Tales series, which looks to offer meaningful and faithful variants of these popular worldwide stories." -- publisher