by Eric A. Kimmel and Erik Brooks

In this Southwestern version of the Gingerbread Man, a tortilla runs away from the woman who is about to cook him

"In this celebration of friendship, best friends Cecilia and Miguel forgive mistakes, share adventures, and-- sometimes--even become family"--|cProvided by publisher

Chavela and the magic bubble

When Chavela blows a bubble with a strange new gum, she floats away to Mexico, where her great-grandfather once worked harvesting the tree sap that makes gum chewy 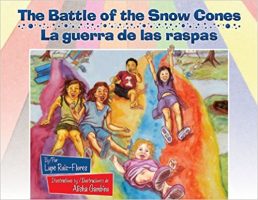 Ten-year-old Elena sets up a snow cone stand in front of her house, and when her friend Alma sets up a stand of her own, it creates an ever-escalating competition between the two girls to see who can outdo the other.

Charro Claus and the Tejas Kid

One Christmas Eve, Santa Claus asks his cousin Pancho to help him deliver toys to the boys and girls along the Texas-Mexico border, and when he agrees, Santa magically transforms him into Charro Claus

Tomás and the library lady

by Pat Mora and Raúl Colón

While helping his family in their work as migrant laborers far from their home, Tomás finds an entire world to explore in the books at the local public library, which has a significant impact on the boy when he grows up to be Chancellor of the University of California, Riverside