A Day for Rememberin’

by Leah Henderson and Floyd Cooper

"A moving tribute to the little-known history behind the first Memorial Day, illustrated by Coretta Scott King Award winner Floyd Cooper Today is a special day. Eli knows it’s important if he’s allowed to miss one second of school, his “hard-earned right.” Inspired by true events and told through the eyes of a young boy, this is the deeply moving story about what is regarded as the first Memorial Day on May 1, 1865. Eli dresses up in his best clothes, Mama gathers the mayflowers, Papa straightens his hat, and together they join the crowds filling the streets of Charleston, South Carolina, with bouquets, crosses, and wreaths. Abolitionists, missionaries, teachers, military officers, and a sea of faces Black, Brown, and White, they march as one and sing for all those who gave their lives fighting for freedom during the Civil War. With poignant prose and celebratory, powerful illustrations, A Day for Rememberin’ shines light on the little-known history of this important holiday and reminds us never to forget the people who put their lives on the line for their country. The book is illustrated by award-winning illustrator Floyd Cooper and includes archival photos in the back matter, as well as an author’s note, bibliography, timeline, and index." -- publisher 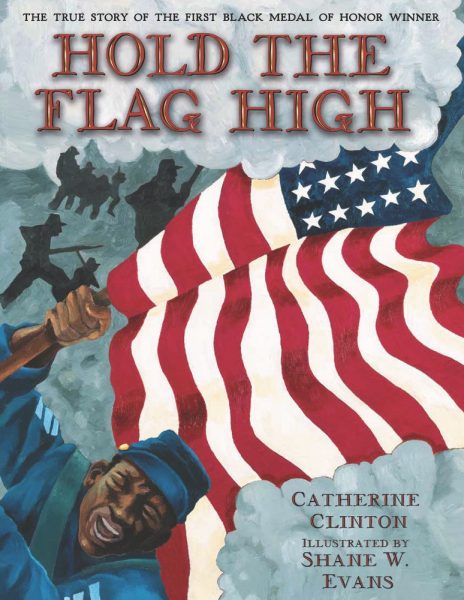 "Hold the Flag High is the true story of William Carney, the first Black Medal of Honor winner and Civil War hero. As sergeant of the Massachusetts 54th, an all-Black regiment, he was one of only a few Black officers to serve during the Civil War. In the Battle of Fort Wagner, he risked life and limb to make sure that “Old Glory” never stopped waving." -- published

The escape of Robert Smalls

by Jehan Jones-Radgowski and Poppy Kang

In the midst of the bloody U.S. Civil War, an enslaved man named Robert Smalls carried out a dangerous plan. Smalls secretly took control of a Confederate steamboat, the Planter, and sailed the ship toward a Union fleet. A little known story of courage, hope, and peril during the Civil War, this true account celebrates an unsung American hero.

'Following the 2015 mass shooting that took nine lives in a historic Black church in Charleston, South Carolina, President Obama sang "Amazing grace" to a grieving congregation and nation. Inspired by the event, songwriter Zoe Mulford wrote a song called "The president sang amazing grace."' This picture book features the lyrics of this song and the paintings by filmmaker Jeff Scher, originally created for a short film for the song, performed by Joan Baez'--Front book flap

by Emily Jenkins and Sophie Blackall

Depicts families, from England to California and from 1710 to 2010, preparing and enjoying the dessert called blackberry fool. Includes a recipe and historical notes

Philip Reid was an enslaved African American who volunteered to work with the delicate plaster mold needed to create Freedom, the statue that stands atop the capital building in Washington, D.C