"Gabriela is super excited when her gift from Titi Sylvia finally arrives. She loves the colorful, glittery butterfly wings! She stands in the middle of her room and flaps and flaps her new wings, but nothing happens. She jumps off her bed, vigorously moving the wings up and down, but again, nada. She hops down the hallway and the stairs, but she still can't fly! Disappointed, Gabriela goes to the garage, digs into her father's toolbox and sets about trying to fix the broken butterfly wings. Maybe she can add a battery or an engine. Her father has a better idea, though, and encourages her to close her eyes and think about where she would like to fly. Soon she is envisioning El Yunque, a rainforest on the island of Puerto Rico that is full of tall green trees, humming waterfalls and chattering birds. She can even hear the coquí, a tiny tree frog that lives only on the island, singing its special song: coquí-coquí. Demonstrating the joy found in using one's imagination, this bilingual picture book depicts a young girl drawing on her senses-smell, hearing, sight-to return to a beloved place. Kids will appreciate the beauty of the rainforest's birds, frogs and other natural wonders while admiring a strong girl willing to create solutions to problems." -- publisher

Coquí in the City

"A heartfelt picture book based on the author-illustrator’s own experiences, about a boy who moves to the U.S. mainland from Puerto Rico and realizes that New York City might have more in common with San Juan than he initially thought. Miguel’s pet frog, Coquí, is always with him: as he greets his neighbors in San Juan, buys quesitos from the panadería, and listens to his abuelo’s story about meeting baseball legend Roberto Clemente. Then Miguel learns that he and his parents are moving to the U.S. mainland, which means leaving his beloved grandparents, home in Puerto Rico, and even Coquí behind. Life in New York City is overwhelming, with unfamiliar buildings, foods, and people. But when he and Mamá go exploring, they find a few familiar sights that remind them of home, and Miguel realizes there might be a way to keep a little bit of Puerto Rico with him—including the love he has for Coquí—wherever he goes." -- publisher

"Maxy is a happy puppy who lives with Clarita and her family in a house filled with music and laughter on the island of Puerto Rico. On sunny days, Clarita and Maxy go to the park or on adventures under the flamboyant tree. On rainy days, they stay inside and play games or read books. But one day, Maxy sees everyone rushing around, putting things in boxes. Someone says, "María is coming!" That night, Hurricane María roared ashore; there was thunder, lightning and lots of rain. Maxy was terrified! Finally, the power went out and the house and everything around it was completely dark. The next day when they went outside, they saw destroyed homes, flooded roads and knocked-down trees-including their beloved flamboyant! There was no electricity for a long time, and everyone had to stand in long lines for food, gas and even water to drink. Eventually, power is restored and Maxy thinks everything is going to be okay. Until one day, the clouds start to gather and he hears thunder and whistling winds. Trembling and whining, he races under the bed! Eventually, and with the help of loved ones, Maxy-like many children who go through natural disasters-learns to overcome his fear and appreciate the benefits of rain." -- publisher

"A lyrical, vibrant tribute to the amazing life and legacy of Pura Belpré, a lauded storyteller, librarian, and pioneer of bilingual storytimes Pura’s abuela always has a cuento to share. She crows ¡Qui-qui-ri-quí! for Señor Gallo, booms Borom, Borom for Señor Zapo, and tells of a beautiful cockroach who loves a mouse. Pura clings to these stories like coquíes cling to green leaves. When Pura grows up and moves from Puerto Rico to Harlem, she gets a job at the library, where she is surrounded by stories—but they’re only in English. Where is Señor Gallo? Where is Pérez the mouse? Where is Puerto Rico on these shelves? She decides to tell children the tales of her homeland in English and in Spanish. Lyrically written, with lively illustrations, Pura’s Cuentos captures the exuberant spirit and passion of Pura Belpré: celebrated storyteller, author, folklorist, and the first Latina librarian in New York City. A pioneer of bilingual storytimes, she welcomed countless new families to the library, formed cultural bridges in her community, and broke the rules by telling stories that weren’t printed in books—at least, not yet." -- publisher

"Author-illustrator Carlos Aponte takes readers on a journey to the heart of Puerto Rico in this enchanting picture book set in Old San Juan. Carlitos lives in a happy home with his mother, his abuela, and Coco the cat. Life in his hometown is cozy as can be, but the call of the capital city pulls Carlitos across the bay in search of his father. Jolly piragüeros, mischievous cats, and costumed musicians color this tale of love, family, and the true meaning of home." -- publisher 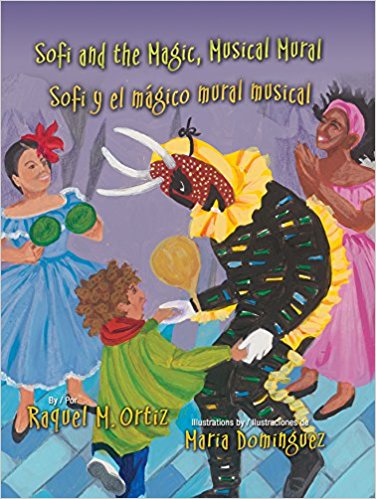 Sofi and the magic, musical mural

On the way back from the bodega, Sofia is drawn into a life-like mural of Old San Juan where she dances, sings, and conquers her fear of the vejigante before being called back to the barrio by her mother.