La princesa and the pea 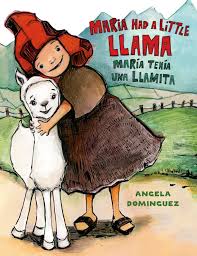 In this bilingual version of the classic rhyme, set in Peru, Maria takes her llama to school one day.

The story of Saint Martín de Porres--an endearing tale of perseverance, faith, and triumph over racial and economic prejudice.

Up and down the Andes

by Laurie Krebs and Aurélia Fronty

by Pat Mora and Rafael López

"Peanuts, blueberries, corn, potatoes, tomatoes, and more — here is a luscious collection of haiku celebrating foods native to the Americas. Brimming with imagination and fun, these poems capture the tasty essence of foods that have delighted, united, and enriched our lives for centuries. Exuberant illustrations bring to life the delicious spirit of the haiku, making Yum! ¡Mmmm! ¡Qué rico! an eye-popping, mouth-watering treat. Open it and dig in! Translated from Yum! ¡MmMm! ¡Qué Rico! Americas' Sproutings. A collection of haiku focusing on fourteen foods native to the Americas, celebrating the fun of the foods as well as their origins." -- publisher