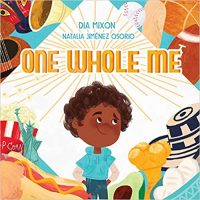 "Part of the best-selling Little People, BIG DREAMS series, Jesse Owens tells the inspiring story of this track and field legend. In this book from the critically acclaimed, multimillion-copy best-selling Little People, BIG DREAMS series, discover the life of Jesse Owens, the great track and field star. The youngest of ten children, Jesse grew up working in the cotton fields of Alabama. Discovered by his high school track and field coach, Jesse quickly rose to fame as an athlete. He went on the challenge racism on the world stage at the 1936 Berlin Olympics and made new world records. This moving book features stylish and quirky illustrations and extra facts at the back, including a biographical timeline with historical photos and a detailed profile of the athlete and activist's life." -- publisher

Northbound: A Train Ride Out of Segregation

"On his first train ride, Michael meets a new friend from the “whites only” car—but finds they can hang together for only part of the trip—in the last story in a trilogy about the author’s life growing up in the segregated South. Michael and his granddaddy always stop working to watch the trains as they rush by their Alabama farm on the way to distant places. One day Michael gets what he’s always dreamed of: his first train journey, to visit cousins in Ohio! Boarding the train in the bustling station, Michael and his grandma follow the conductor to the car with the “colored only” sign. But when the train pulls out of Atlanta, the signs come down, and a boy from the next car runs up to Michael, inviting him to explore. The two new friends happily scour the train together and play in Bobby Ray’s car—until the conductor calls out “Chattanooga!” and abruptly ushers Michael back to his grandma for the rest of the ride. How could the rules be so changeable from state to state—and so unfair? Based on author Michael Bandy’s own recollections of taking the train as a boy during the segregation era, this story of a child’s magical first experience is intercut with a sense of baffling injustice, offering both a hopeful tale of friendship and a window into a dark period of history that still resonates today." -- publisher

Regardless of whether they have heard of jazz or Art Tatum, young readers will appreciate how Parker uses simple, lyrical storytelling and colorful, energetic ink-and-wash illustrations to show the world as young Art Tatum might have seen it. Tatum came from modest beginnings and was nearly blind, but his passion for the piano and his acute memory for any sound that he heard drove him to become a virtuoso who was revered by both classical and jazz pianists alike. Included in the back matter is a biography and bibliography.

Recounts the life of William Powell, an African American golfer discriminated against because of his race, and how his perseverance and spirit helped him rise from a caddy to the first African American owner of a public golf course