"The team behind Baby Goes to Market and B Is for Baby visit a Nigerian village for a humorous ode to childhood ingenuity. Lami is the best chicken catcher in the whole village. Her sister may be speedy at spelling, her friend fast at braiding hair, and her brother brave with bulls, but when it comes to chickens, nobody is faster or braver than Lami. That is, until the day when Lami chases a little too fast, up the baobab tree, and reaches a little too far ... ow! How can she catch chickens with an ankle that's puffed up like an angry lizard? Could it be, as Nana Nadia says, that quick thinking is more important than quick running? Award-winning author Atinuke celebrates Nigerian village life in a story vibrantly illustrated by Angela Brooksbank with a universal message at its heart"--Amazon.com

by Tanitoluwa Adewumi and Courtney Dawson

"The incredible true story of Tani Adewumi, a Nigerian refugee who garnered international news coverage after winning the New York State Chess Championship at the age of eight. Tani's story of finding a new life in America reminds children that perseverance and hope make a difference--and small acts of kindness can make the world a better place. Tani Adewumi's moving true story of immigrating to America, developing his talent for chess, and finding a new home will inspire families looking for stories of hope and kindness. Tani was just six years old when he and his family fled persecution in Nigeria and became refugees in New York City. Tani was amazed, and a little overwhelmed, by all the new things in America. But one new experience turned out to be the most wonderful discovery--chess! With joy and determination, Tani studied hard, practicing chess for hours on the floor of his room in the homeless shelter. Less than a year later, he won the New York State Chess Championship, and through one act of kindness after another, found a new home. This picture book biography for children ages 5 to 10 tells the captivating real-life story of a young chess champion; celebrates the power of hope and hard work; reminds us that we can each make the world a more welcoming place; encourages empathy and compassion; includes beautiful digital illustrations by Courtney Dawson; is perfect for children reading alone; story time for families, classrooms, and libraries; and celebrations of World Refugee Day. This exciting book about chess, family, and community reminds us all that home is a place where you can follow your dreams." -- publisher

B is for baby

Set in West Africa, one morning after breakfast, Baby's big brother is getting ready to take the basket of bananas all the way to Baba's bungalow in the next village. He'll have to go along the bumpy road, past the baobab trees, birds, and butterflies, and all the way over the bridge. But what he doesn't realize is that his very cute, very curious baby sibling has stowed away on his bicycle.

Chicken in the kitchen

by Nnedi Okorafor and Mehrdokht Amini

Awakened by strange sounds, Anyaugo discovers a giant chicken in her kitchen and has to muster the courage to remove it before the chicken destroys her family's preparations for the New Yam Festival

Chinaza watches her little brother, Ife, get his first haircut, and helps her family prepare the celebration for this rite of passage. 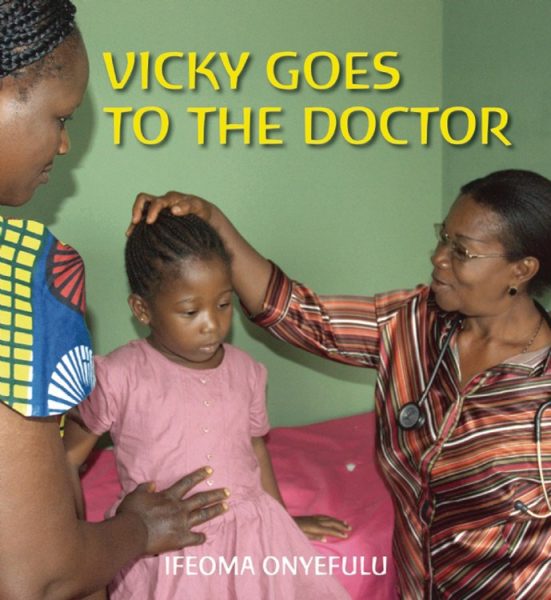 Vicky goes to the doctor

Vicky doesn't want to eat or play with her friends. She's not feeling well, so Mama takes her to see the doctor. The kind doctor takes her temperature and listens to her chest, and gives Mama good advice. Soon Vicky is better again, and playing with her friends. Set in Nigeria, this gentle and reassuring First Experiences story will strike a chord with young children everywhere.--publisher

As a young Igbo man, Amadi does not understand why his mother insists he learn to read, since he already knows his numbers and will be a businessman one day, but an older boy teaches him the value of learning about the world through books

Ayoka is put in charge of the family goat, who promptly vanishes, and as Ayoka searches the marketplace she learns from the vendors of many things that have recently disappeared--including bread, sunglasses, and a wig

Chidi has a favorite color, blue. He says it is the best color in the world. His older sister, Nneka, decides to teach him about other colors seen in their village