"In this book from the critically acclaimed, multimillion-copy best-selling Little People, BIG DREAMS series, discover the life of Michelle Obama, the iconic first lady, advocate, lawyer, and author. Young Michelle grew up on the South Side of Chicago in a close-knit family. She loved school, achieving A’s, and worked hard to blaze trails at the universities of Princeton and Harvard. Then, at the beginning of her legal career, she met Barack Obama. As first lady, she used her platform to advocate for women and girls and continues to inspire many with her powerful voice, and best-selling books. This empowering book features stylish and quirky illustrations and extra facts at the back, including a biographical timeline with historical photos and a detailed profile of the inspiring woman’s life. Little People, BIG DREAMS is a best-selling series of books and educational games that explore the lives of outstanding people, from designers and artists to scientists and activists. All of them achieved incredible things, yet each began life as a child with a dream." -- publisher

The Rabbi and the Reverend

by Audrey Ades and Chiara Fedele

"A timely tale of Black and white Americans working together for a cause. When Dr. Martin Luther King Jr. gave his “I Have a Dream” speech at the March on Washington, he did not stand alone. He was joined by Rabbi Joachim Prinz, a refugee from Nazi Germany, who also addressed the crowd. Though Rabbi Prinz and Dr. King came from very different backgrounds, they were united by a shared belief in justice. And they knew that remaining silent in the face of injustice was wrong. Together, they spoke up and fought for a better future." -- publisher

The Singer and the Scientist

by Lisa Rose and Isabel Muñoz

"A little known story about the friendship between the great singer and the great scientist, Marian Anderson and Albert Einstein, and a lesson that true friendship knows no bounds. It's 1937, and Marian Anderson is one of the most famous singers in America. But after she gives a performance for an all-white audience, she learns that the nearby hotel is closed to African Americans. She doesn't know where she'll stay for the night. Until the famous scientist Albert Einstein invites her to stay at his house. Marian, who endures constant discrimination as a Black performer, learns that Albert faced prejudice as a Jew in Germany. She discovers their shared passion for music—and their shared hopes for a more just world." -- publisher

William Still and his freedom stories

"William Still’s parents escaped slavery but had to leave two of their children behind, a tragedy that haunted the family. As a young man, William went to work for the Pennsylvania Anti-Slavery Society, where he raised money, planned rescues, and helped freedom seekers who had traveled north. One day, a strangely familiar man came into William’s office, searching for information about his long-lost family. Could it be? Motivated by his own family’s experience, William Still began collecting the stories of thousands of other freedom seekers. As a result, he was able to reunite other families and build a remarkable source of information, including encounters with Harriet Tubman, Henry “Box” Brown, and William and Ellen Craft." -- publisher

by Lisa Rogers and Chuck Groenink

"This simple nonfiction picture book about the beloved American poet William Carlos Williams is also about how being mindful can result in the creation of a great poem like “The Red Wheelbarrow”—which is only sixteen words long. “Look out the window. What do you see? If you are Dr. William Carlos Williams, you see a wheelbarrow. A drizzle of rain. Chickens scratching in the damp earth.” The wheelbarrow belongs to Thaddeus Marshall, a street vendor, who every day goes to work selling vegetables on the streets of Rutherford, New Jersey. That simple action inspires poet and doctor Williams to pick up some of his own tools—a pen and paper—and write his most famous poem. In this lovely picture book, young listeners will see how paying attention to the simplest everyday things can inspire the greatest art, as they learn about a great American poet." -- publisher

The Roots of Rap

"Explore the roots of rap in this stunning, rhyming, triple-timing picture book! A generation voicing stories, hopes, and fears founds a hip-hop nation. Say holler if you hear. The roots of rap and the history of hip-hop have origins that precede DJ Kool Herc and Grandmaster Flash. Kids will learn about how it evolved from folktales, spirituals, and poetry, to the showmanship of James Brown, to the culture of graffiti art and break dancing that formed around the art form and gave birth to the musical artists we know today. Written in lyrical rhythm by award-winning author and poet Carole Boston Weatherford and complete with flowing, vibrant illustrations by Frank Morrison, this book beautifully illustrates how hip-hop is a language spoken the whole world 'round, it and features a foreward by Swizz Beatz, a Grammy Award winning American hip-hop rapper, DJ, and record producer." -- publisher 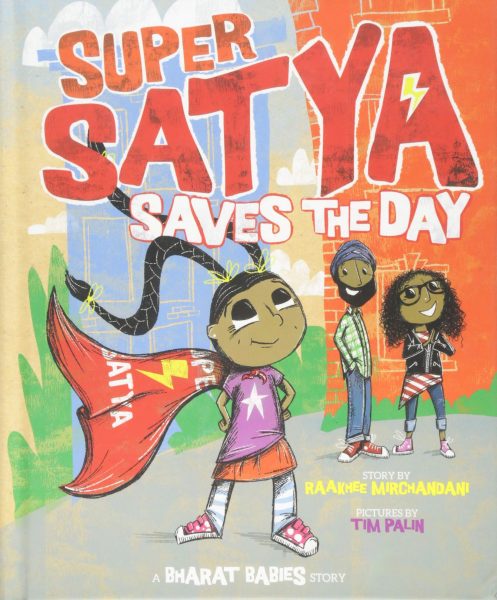 by Raakhee Mirchandani and Tim Palin

Super Satya is ready to have a super day, including finally conquering the tallest slide in Hoboken. But her day takes a not-so-super turn when she realizes her superhero cape is stuck at the dry cleaner. Will she be able to face her fears, help her friends and be the true hero everyone knows she is? Super Satya Saves The Day introduces Satya, a precocious Indian-American superhero.--Publisher's web site

"At nine years old, Eugenie Clark developed an unexpected passion for sharks after a visit to the Battery Park Aquarium in New York City. At the time, sharks were seen as mindless killing machines, but Eugenie knew better and set out to prove it. Despite many obstacles in her path, including trying to break into the scientific field as a woman, Eugenie was able to study the creatures she loved so much. From her many discoveries to the shark-related myths she dispelled, Eugenie's wide scientific contributions led to the well-earned nickname "Shark Lady," as she become a fixture in the world of ocean conservation and shark research." -- publisher

Take a picture of me, James Van Der Zee!