by Alexandra Katona and Claudia Navarro

"This magical home turns a normal Sunday into domingo: the best day of the week.” Warm memories wash over a first-generation Latinx American girl as she experiences a typical Sunday night dinner at her Abuelita’s house. As Alejandra thinks about all the good times her family has had there, she decides that she wants to be brave and try speaking Spanish with Abuelita so that they can deepen their bond. A timely tale that reflects the experience of many American families." -- publisher

by Katheryn Russell-Brown and Laura Freeman

In this stirring biography of a true artistic and social icon, young readers learn how Aretha's talent, intelligence, and perseverance made her a star who will shine on for generations to come. --

"Winner of the Coretta Scott King Illustration Award! From a New York Times bestselling author and an acclaimed illustrator comes this vibrant portrait of Aretha Franklin that pays her the R-E-S-P-E-C-T this Queen of Soul deserves. Aretha Franklin was born to sing. The daughter of a pastor and a gospel singer, her musical talent was clear from her earliest days in her father’s Detroit church where her soaring voice spanned more than three octaves. Her string of hit songs earned her the title “the Queen of Soul,” multiple Grammy Awards, and a place in the Rock & Roll Hall of Fame. But Aretha didn’t just raise her voice in song, she also spoke out against injustice and fought for civil rights. This authoritative, rhythmic, Coretta Scott King Illustration Award–winning picture book biography will captivate young readers with Aretha’s inspiring story." -- publisher

A Fist for Joe Louis and Me

"2020-2021 Keystone to Reading Elementary Book Award List Gordy and his family live in Detroit, Michigan, the heart of the United States automobile industry. Every night after coming home from work at one of the plants, Gordy's father teaches him how to box. Their hero is the famous American boxer Joe Louis, who grew up in Detroit. But the Great Depression has come down hard on the economy. Detroit's auto industry is affected and thousands of people lose their jobs, including Gordy's father. When his mother takes on work with a Jewish tailor, Gordy becomes friends with Ira, the tailor's son, bonding over their shared interest in boxing and Joe Louis. As the boys' friendship grows, Gordy feels protective of Ira, wanting to help the new boy fit in. At the same time, America is gearing up for the rematch between Joe Louis and the German boxer, Max Schmeling. For many Americans this fight is about good versus evil (US against Nazi Germany). Against the backdrop of the 1938 Fight of the Century, a young boy learns what it means to make a stand for a friend." -- publisher 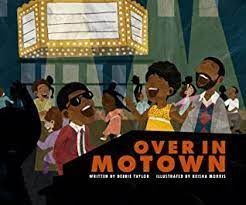 by Debbie A. Taylor and Keisha Morris

"Debbie Taylor's Over In Motown! is an energetic picture book celebrating the musical genres and rhythms of the industry that fueled Detroit in the Motown era. Based on the Over In The Meadow rhyme, this counting book features beautiful illustrations by Keisha Morris." -- publisher