by Caren Stelson and Akira Kusaka

"In this deeply moving nonfiction picture book, award-winning author Caren Stelson brings Sachiko Yasui's story of surviving the atomic bombing of Nagasaki and her message of peace to a young audience. Sachiko's family home was about half a mile from where the atomic bomb fell on August 9, 1945. Her family experienced devastating loss. When they returned to the rubble where their home once stood, her father miraculously found their serving bowl fully intact. This delicate, green, leaf-shaped bowl—which once held their daily meals—now holds memories of the past and serves as a vessel of hope, peace, and new traditions for Sachiko and the surviving members of her family." -- publisher

Flying Paintings: The Zhou Brothers: A Story of Revolution and Art

"The epic story of two Chinese brothers who became art-world legends, illustrated with stunning paintings by the artists themselves First there was one Zhou brother, and then there were two. They lived in a bookstore with their grandmother, Po Po, whose stories of paintings that flew through the air and landed on mountain cliffs inspired them to create their own art. Amid the turbulence of China’s Cultural Revolution in the 1970s, the Zhou Brothers began painting together on the same canvas. Today, ShanZuo and DaHuang Zhou are icons in the art world, renowned for working side by side on all their paintings and sculptures. In this extraordinary biography, author Amy Alznauer joins with the Zhou Brothers to tell the story of their unique and often difficult childhood and their pursuit of a wild, impossible dream. The lyrical writing blends elements of legend, while the brothers’ dramatic illustrations soar with vibrant colors and surreal imagery from ancient Chinese cliff paintings. An inspiration for young artists and dreamers of all kinds, this deeply felt collaboration explores how art can bring people together, as well as set them free." -- publisher

From Cotton to T-Shirts

by Cari. Meister and Albert Pinilla

"A child wonders where t-shirts come from and learns about how cotton is harvested and made into yarn to make t-shirts. This illustrated narrative nonfiction book includes a map of where major cotton-growing areas are, a glossary, and further resources" -- publisher

"This sweet and gentle picture book celebrates summer in Japan, as one little girl shares her love for bugs with her cousin who is visiting from America. Two young cousins who are separated by language, continent and culture meet for the first time when Jill’s family travels from America to Japan to stay with Natsumi’s family during the summer holidays. Natsumi’s nervousness about meeting her cousin from across the sea quickly disappears when she discovers that her cousin is a lot like her: they both love summertime’s hot sandy beaches, cool refreshing watermelon, festivals and fireworks. Then Jill asks Natsumi about the strange buzzing sound that comes from the nearby trees, and Natsumi is nervous once again. What if Jill is frightened of Natsumi’s cherished cicadas, the insects that sing the music of summertime? This is a tender, evocative story that celebrates the special pleasures of summertime and of reunions with faraway family and friends." -- publisher

"Discover the unlikely story of Beate Sirota Gordon, a young woman who grew up in Japan and returned as a translator working for the American military after WWII. Fluent in Japanese language and culture, she was assigned to work with the delegation writing the new post-war constitution. Thanks to her bravery in speaking up for the women of Japan, the new constitution ended up including equal rights for all women." -- publisher

by Helaine Becker and Liz Wong

"This is the story of real-life pirate queen Zheng Yi Sao, who took control of the South China seas in the early 19th century and became known as one of the most powerful pirates in history. The most powerful pirate in history was a woman who was born into poverty in Guangzhou, China, in the late 1700s. When pirates attacked her town and the captain took a liking to her, she saw a way out. Zheng Yi Sao agreed to marry him only if she got an equal share of his business. When her husband died six years later, she took command of the fleet. Over the next decade, the pirate queen built a fleet of over 1,800 ships and 70,000 men. On land and sea, Zheng Yi Sao’s power rivaled the emperor himself. Time and again, her ships triumphed over the emperor’s ships. When she was ready to retire, Zheng Yi Sao surrendered — on her own terms, of course. Even though there was a price on her head, she was able to negotiate her freedom, living in peace and prosperity for the rest of her days. Zheng Yi Sao’s powerful story is told in lyrical prose by award-winning author Helaine Becker. Liz Wong’s colorful, engaging illustrations illuminate this inspiring woman in history. An author’s note provides historical context and outlines the challenges of researching a figure about whom little is known." -- publisher

Story of the Mongolian Tent House

"Based on an original tale by award-winning Mongolian author, Dashdondog Jamba, and retold by distinguished author, Anne Pellowski, find out how the traditional Mongolian tent house (called a ger in Mongolian and a yurt in Turkish), was created in the ancient past by drawing on the example of nature, and how it later became a symbol of friendship and harmony. With stunning illustrations by renowned artist, Beatriz Vidal, experience first-hand the wide-open steppes of Mongolia!" -- publisher 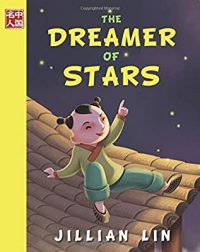 The Dreamer of Stars

"DID YOU KNOW that a scientist from ancient China was the first person in history who discovered that the world was round? Two thousand years ago, a little boy called Zhang Heng loved to gaze up at the stars and the night sky. As he grew up, he devoted his life to studying them and making interesting discoveries. Zhang was a brilliant inventor as well as a great painter, poet, and mathematician. In The Dreamer Of Stars, find out why people believe Zhang was the cleverest man in the history of China." -- publisher