A Bear For Bimi

"A timely topic celebrating the joys of a diverse neighborhood. When Bimi’s refugee family immigrates to America and moves into Evie’s neighborhood, not everybody is welcoming. But with the help of Evie’s teddy bear, Bimi’s family becomes part of the neighborhood and Evie makes a new friend." -- publisher 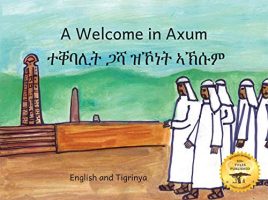 by Jane. Kurtz and Alex Regassa

"Axum, an ancient Ethiopian city, once rivaled Persia and Rome in wealth and influence. It was a trade hub through which precious metals, silks and ideas fueled a thriving economy and vibrant culture. A series of fair-minded Ethiopian Kings offered peoples of many faiths to find sanctuary from threats abroad, and for centuries Christians, Muslims and Jews have shared Axum in peace. For thousands of years, Ethiopia has been known around the world as a land of justice and wisdom. Share this heart-warming tale of religious tolerance with your young reader." -- publisher

by Amanda Gorman and Loren Long

"In this stirring, much-anticipated picture book by presidential inaugural poet and activist Amanda Gorman, anything is possible when our voices join together. As a young girl leads a cast of characters on a musical journey, they learn that they have the power to make changes—big or small—in the world, in their communities, and in most importantly, in themselves. With lyrical text and rhythmic illustrations that build to a dazzling crescendo by #1 New York Times bestselling illustrator Loren Long, Change Sings is a triumphant call to action for everyone to use their abilities to make a difference." -- publisher

"A lyrical retelling of the Old Testament story of baby Moses being hidden from Pharaoh, told from the perspective of his protective older sister. A baby boy is hidden in a basket floating on the Nile. A fearful mother sings a song of protection. And a brave big sister seeks a chance to save her brother. Meet the family of baby Moses in this lyrical retelling, and see how God's faithfulness can be revealed through one small person who takes a big risk for someone she loves." -- publisher

by Jamie Kiffel-Alcheh and Lauren Gallegos

"A fun way to reinforce the idea that it's fun and interesting to eat special foods on Jewish holidays, while also an accessible way to teach non-Jewish kids a bit about Passover When Noa refuses to swap food from her lunch one day, her friends wonder why. She explains it's because it's Passover. For the rest of the week, she brings Passover foods to school to share with her friends to let them enjoy the holiday fun." -- publisher

Osnat and Her Dove

by Sigal Samuel and Vali Mintzi

"Osnat was born five hundred years ago – at a time when almost everyone believed in miracles. But very few believed that girls should learn to read. Yet Osnat's father was a great scholar whose house was filled with books. And she convinced him to teach her. Then she in turn grew up to teach others, becoming a wise scholar in her own right, the world's first female rabbi! Some say Osnat performed miracles – like healing a dove who had been shot by a hunter! Or saving a congregation from fire! But perhaps her greatest feat was to be a light of inspiration for other girls and boys; to show that any person who can learn might find a path that none have walked before." -- publisher

The Rabbi and the Reverend

by Audrey Ades and Chiara Fedele

"A timely tale of Black and white Americans working together for a cause. When Dr. Martin Luther King Jr. gave his “I Have a Dream” speech at the March on Washington, he did not stand alone. He was joined by Rabbi Joachim Prinz, a refugee from Nazi Germany, who also addressed the crowd. Though Rabbi Prinz and Dr. King came from very different backgrounds, they were united by a shared belief in justice. And they knew that remaining silent in the face of injustice was wrong. Together, they spoke up and fought for a better future." -- publisher

The Singer and the Scientist

by Lisa Rose and Isabel Muñoz

"A little known story about the friendship between the great singer and the great scientist, Marian Anderson and Albert Einstein, and a lesson that true friendship knows no bounds. It's 1937, and Marian Anderson is one of the most famous singers in America. But after she gives a performance for an all-white audience, she learns that the nearby hotel is closed to African Americans. She doesn't know where she'll stay for the night. Until the famous scientist Albert Einstein invites her to stay at his house. Marian, who endures constant discrimination as a Black performer, learns that Albert faced prejudice as a Jew in Germany. She discovers their shared passion for music—and their shared hopes for a more just world." -- publisher

A Sweet Meeting on Mimouna Night

"A story about a young girl celebrating the Moroccan Jewish holiday of Mimouna with a new Muslim friend. It’s Mimouna — the Moroccan Jewish holiday that marks the end of Passover, and when blessings are given for a year of prosperity and good luck. Miriam wants to help her mother make the sweet moufleta pancakes they always eat at their Mimouna party, but after not eating doughy treats for the week of Passover, they don’t have any flour in the house! So, Miriam’s mother takes her to visit their Muslim neighbors, who share their flour. The women drink tea together, and Miriam makes friends with a young girl named Jasmine. Miriam almost drops the bag of flour when she and Jasmine go to fetch it from the storeroom — but luckily Jasmine is there to catch it! Jasmine and her family then join Miriam’s family and friends to celebrate Mimouna. This sweet story of friendship and shared customs will introduce North American readers to the Mimouna holiday. The book concludes with an author’s note and a recipe for making moufleta, the sweet, paper-thin pancakes featured in the story, so that readers can enjoy, too." -- publisher