by Sara O'Leary and Qin Leng

"Being the new kid is hard, a child in the school playground tells us. I can think of better things to ask than if I’m a boy or a girl. Another child comes along and says she gets asked why she always has her nose in a book. Someone else gets asked where they come from. One after another, children share the questions they’re tired of being asked again and again — as opposed to what they believe are the most important or interesting things about themselves. As they move around the playground, picking up new friends along the way, there is a feeling of understanding and acceptance among them. And in the end, the new kid comes up with the question they would definitely all like to hear: “Hey kid, want to play?” Sara O’Leary’s thoughtful text and Qin Leng’s expressive illustrations tell a story about children who are all different, all themselves, all just kids." -- publisher

Grandpa Across the Ocean

"Though separated by language, age, and an ocean, a child and grandparent find common ground in this warm, witty picture book Grandpa lives on the other side of the ocean. He takes naps all the time. He eats different foods. He speaks an unfamiliar language. His house is the most boring place on Earth! Or is it? A little time together just might reveal that Grandpa is also a great singer, an energetic sandcastle builder, and a troublemaker . . . just like his grandson! With her signature warmth and humor, award-winning author-illustrator Hyewon Yum shares the challenges and joys of having a relative who lives far away—proving that even from across the ocean, the grandparent-grandchild relationship is a very special one." -- publisher

"An Asian/Pacific American Award for Literature Honor Book Meet Danbi, the new girl at school! Danbi is thrilled to start her new school in America. But a bit nervous too, for when she walks into the classroom, everything goes quiet. Everyone stares. Danbi wants to join in the dances and the games, but she doesn't know the rules and just can't get anything right. Luckily, she isn't one to give up. With a spark of imagination, she makes up a new game and leads her classmates on a parade to remember! Danbi Leads the School Parade introduces readers to an irresistible new character. In this first story, she learns to navigate her two cultures and realizes that when you open your world to others, their world opens up to you." -- publisher

Once Upon An Hour

"A child is told a bedtime tale about how the 12 animals of the Korean zodiac came together to save a young character on their quest for a plant known to have healing properties in this gorgeously illustrated picture book. Yu-Rhee, a young Korean girl, wants to know how to tell time using a clock. Her mother tells her a tale from her childhood based on the traditional Korean practice of timekeeping, where the 12 animals of the zodiac are assigned to 2-hour sections of the 24-hour clock. Told from the point of view of a mountain, the story follows a child as they climb the mountainside in search of a plant to heal their ailing mother. The climb is steep, the path wild and the way difficult. The mountain watches the child struggle and calls on the animals that live on the mountainside to help the child, but as sunlight turns to moonlight, each animal claims to be too busy. Ultimately, Once Upon an Hour is a story about determination and teamwork that shows young readers the importance of helping others." -- publisher

"A breathtaking picture book featuring a Korean girl and her haenyeo (free diving) grandmother about intergenerational bonds, finding courage in the face of fear, and connecting with our natural world. Dayeon wants to be a haenyeo just like Grandma. The haenyeo dive off the coast of Jeju Island to pluck treasures from the sea—generations of Korean women have done so for centuries. To Dayeon, the haenyeo are as strong and graceful as mermaids. To give her strength, Dayeon eats Grandma’s abalone porridge. She practices holding her breath while they do the dishes. And when Grandma suits up for her next dive, Dayeon grabs her suit, flippers, and goggles. A scary memory of the sea keeps Dayeon clinging to the shore, but with Grandma’s guidance, Dayeon comes to appreciate the ocean’s many gifts. Tina Cho’s The Ocean Calls, with luminous illustrations by muralist Jess X. Snow, is a classic in the making." -- publisher 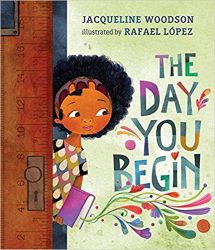