From the Tops of the Trees

"A moving and inspiring true story about how a father's love helped a daughter dream of a life beyond the confines of the refugee camp where they live Young Kalia has never known life beyond the fences of the Ban Vinai Refugee Camp. The Thai camp holds many thousands of Hmong families who fled in the aftermath of the little-known Secret War in Laos that was waged during America's Vietnam War. For Kalia and her cousins, life isn't always easy, but they still find ways to play, racing with chickens and riding a beloved pet dog. Just four years old, Kalia is still figuring out her place in the world. When she asks what is beyond the fence, at first her father has no answers for her. But on the following day, he leads her to the tallest tree in the camp and, secure in her father's arms, Kalia sees the spread of a world beyond. Kao Kalia Yang's sensitive prose and Rachel Wada's evocative illustrations bring to life this tender true story of the love between a father and a daughter." -- publisher

Fierce and determined children confront the hardships of Ban Vinai refugee camp, where the author lived as a child. Yang's older sister, seven-year-old Dawb, was one of the story's warriors, and her brave adventure unfolds here with all the suspense and excitement that held her five- year-old sister spellbound many years later. Accompanied by the imagery of debut illustrator Billy Thao, the warriors' secret mission shows what feats of compassion and courage children can perform, bringing more than foraged greens back to the younger children and to their elders. In this unforgiving place, with little to call their own, these children are the heroes, offering gifts of hope and belonging in a truly unforgettable way

"When someone you love dies, you know what doesn't die? Love. On the hot beach, among colorful umbrellas blooming beneath a bright sun, no one saw a little girl walk into the water. Now, many months later, her bedroom remains empty, her drawers hold her clothes, her pillows and sheets still have her scent, and her mother and father, brothers and sister carry her in their hearts, along with their grief, which takes up so much space. Then one snowy day, the mother and father ask the girl's older brother, "Would you like a room of your own?" He wants to know, "Whose?" They say, "Your sister's." Tenderly, and with refreshing authenticity, beloved Minnesota writer Kao Kalia Yang tells the story of a Hmong American family living with loss and tremendous love. Her direct and poignant words are accompanied by the evocative and expressive drawings of Hmong American artist Xee Reiter. The Shared Room brings a message of comfort and hope to readers young and old"-- 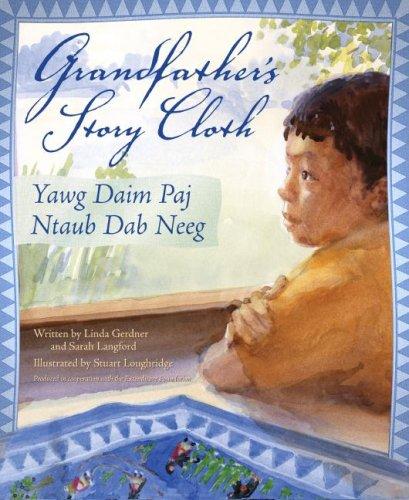 by Linda. Gerdner and Sarah. Langford

Ten-year-old Chersheng helps his beloved grandfather cope with his failing memory, brought on by Alzheimer's disease, by showing him the story quilt Grandfather made after fleeing his homeland, Laos, during wartime.