by Rose Viña and Gloria Félix

"As a young girl in Cuba, Alicia Alonso practiced ballet in tennis shoes. Within a few years, she was in New York City, with a promising ballet career. But her eyesight began to fail. When Alicia needed surgeries to save her vision, dancing was impossible, but she wouldn't give up her dream. She found the strength and determination to return to the stage and become a prima ballerina. This is the true story of a woman who overcame her challenges, mastered her art, and inspired others to dance and dream." -- publisher

Down on James Street

by Nicole McCandless and Byron Gramby

"The moon lit the riverbank as George and Dorothy each made their way to the teen dance hall. It’s 1935, and sons and daughters of black and white workers in Pittsburgh look forward to having some fun dancing the Lindy Hop, until the police come in and break up the dance…with their bully clubs.The teens all scatter, but Dorothy has a plan to save the dance. Is George ready to join the fight? Or will he play it safe and just go home to his family? Down on James Street is based on a real historical incident in 1930’s Pittsburgh. Today, young and old can take inspiration from this wonderful story of courage and solidarity, with gorgeous illustrations by Byron Gramby that summon up the style and the cool of that long-gone era." -- publisher Pepperoni, Pitches (and Other Problems)

"A POWERFUL STORY ABOUT FINDING FRIENDS WHERE YOU DIDN'T EXPECT! Amira used to love eating cheese pizza and playing baseball with her friends. But at her new school, she sits all alone and can't even have her cheese pizza slice because of Olivia! After hitting a home-run during gym, Amira finally gets noticed by the popular crowd. She's so excited to have friends that she doesn't pay attention to Olivia's tears...or Elena's narrowed eyes. Ages 5+" -- publisher

"A powerful, lyrical OwnVoices picture book about the enslavement of Ona Judge and her self-emancipation from George Washington’s household. Ona Judge was enslaved by the Washingtons, and served the President's wife, Martha. Ona was widely known for her excellent skills as a seamstress, and was raised alongside Washington’s grandchildren. Indeed, she was frequently mistaken for his granddaughter. This biography follows her childhood and adolescence until she decides to run away. This book doesn’t shy away from the horrors of slavery, nor the complex role of house servants. Author Ray Anthony Shepard implicates the reader in Ona’s decision to emancipate herself by using a rhetorical refrain, “Why you run, Ona Judge?” This haunting meditation welcomes meaningful and necessary conversation among readers. Illustrator Keith Mallett’s rich paintings include fabric collage and add further feeling and majesty to Ona’s daring escape." -- publisher

" This important yet little-known civil rights story focuses on Roberto Alvarez, a student whose 1931 court battle against racism and school segregation in Lemon Grove, California, is considered the first time an immigrant community used the courts to successfully fight injustice. A must-read for young activists, or for anyone interested in standing up for what’s right. Roberto Alvarez’s world changed the day he could no longer attend Lemon Grove Grammar School in the small, rural community where he lived near San Diego, California. He and the other Mexican American students were told they had to go to a new, separate school—one where they would not hold back the other students. But Roberto and the other students and their families believed the new school’s real purpose was to segregate, to separate. They didn’t think that was right, or just, or legal. Based on true events, this picture book by Sibert award-winning author Larry Dane Brimner and Pura Belpré honor award-winning illustrator Maya Gonzalez follows Roberto and the other immigrant families on their journey." -- publisher 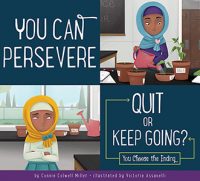 "In this illustrated choose-your-own-ending picture book, Dahabo must decide whether to keep working on her science fair project or quit. Readers make choices for Dahabo and read what happens next, with each story path leading to different consequences. Includes four different endings and discussion questions"--

"Captured in Ethiopia and sold into slavery as a child, Malik Ambar travels throughout the Middle East until he arrives in India. Despite a lifetime of adversity and hardship, Malik’s love of language and ideas helps him persevere and inspires him to study military history. Through education, hard work and perseverance, Malik learns to manage his master’s finances and trains legions of African horsemen as a commander in the Indian Army. As a free man, he becomes a respected diplomat and earns his place as a respected figure in Indian history. Written by science writer Dr. Worku L. Mulat and illustrated by Ethiopia-educated Daniel Getahun, the story of the Ethiopian slave boy who grew to be regarded as one of the greatest leaders of central and southern India reminds us how empowering and liberating education can be. " -- publisher

by Shana Keller and Kayla Stark

by Jerdine Nolen and James Ransome

"A Parents’ Choice Silver Award Recipient. In this inspiring story in the tradition of American black folktales, an enslaved brother and sister are inspired by a majestic and mysterious bird to escape to freedom in this dramatic and unforgettable picture book." -- publisher