by Caren Stelson and Akira Kusaka

"In this deeply moving nonfiction picture book, award-winning author Caren Stelson brings Sachiko Yasui's story of surviving the atomic bombing of Nagasaki and her message of peace to a young audience. Sachiko's family home was about half a mile from where the atomic bomb fell on August 9, 1945. Her family experienced devastating loss. When they returned to the rubble where their home once stood, her father miraculously found their serving bowl fully intact. This delicate, green, leaf-shaped bowl—which once held their daily meals—now holds memories of the past and serves as a vessel of hope, peace, and new traditions for Sachiko and the surviving members of her family." -- publisher

by Suzanne Slade and Cozbi A. Cabrera

by Sage Foster-Lasser and Jon Lasser

"Kiko grows and cultivates her garden, harvesting and sharing the fruits and veggies with her friends, neighbors, and family. This delightful tale serves as a metaphor of nurturing relationships and community, while sharing kindness with others. Grow Kind is a gentle narrative based on positive psychology and choice theory, essentially about cultivating kindness." -- publisher

"In 1936, Adolf Hitler attempted to make the Olympic Games in Berlin, Germany, a showcase of Nazi superiority with a new stadium and the first television broadcast of the Games. He didn't account for African-American sprinter and long jumper James Cleveland "Jesse" Owens, who smashed records throughout his track and field career. Owens turned Hitler's Olympic vision on its head by winning four gold medals in the 100m, 200m, 4x100m relay and long jump. Along the way, he broke or equaled nine Olympic records and set three world records. In graphic nonfiction style, this biography takes readers from Owens's early life to his historic athletic triumphs." -- publisher

"As she climbs aboard the New York bound Silver Meteor train, Ruth Ellen embarks upon a journey toward a new life up North—one she can’t begin to imagine. Stop by stop, the perceptive young narrator tells her journey in poems, leaving behind the cotton fields and distant Blue Ridge mountains." -- publisher 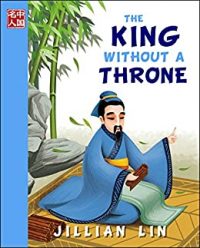 The King Without a Throne

"DID YOU KNOW that Confucius was a teacher who opened the first public school in the world? Read all about his life and his brilliant ideas, which people still study today – 2,500 years later. In The King Without A Throne, discover how Confucius became one of the greatest teachers in the history of China. Together with his following of students he traveled from kingdom to kingdom to give advice to kings. Even so, he wasn’t happy. Read the book to find out why, at the end of his life, Confucius thought he was a failure." -- publisher

The Orphan and the Qallupilluit

by Neil Christopher and Jim Nelson

"Follow the orphan on another adventure! After saving the children at his camp from an ogress, the orphan goes in search of a home. But he meets some scary creatures along the way!" -- publisher