A hat for Mrs. Goldman

by Jacqueline Jules and Durga Bernhard

When Samuel's father, the grand vizier, hears Hamza call Samuel names and tells his son to make sure Hamza never speaks an unkind word to him again, Samuel knows he must obey but has a hard time finding the right means to do so. Includes information about Jewish poet Samuel Ha-Nagid and the legend which inspired the story

Around the world in one Shabbat

Hanukkah around the world

by Tami Lehman-Wilzig and Vicki Wehrman

Introduces Hanukkah, the Jewish festival of lights, and describes how it is celebrated in different areas of the world, including Israel, Istanbul, Italy, Poland, and New York City. Includes glossary and recipes

As good as anybody

by Richard Michelson and Raúl Colón

Martin Luther King, Jr. and Abraham Joshua Heschel. Their names stand for the quest for justice and equality.Martin grew up in a loving family in the American South, at a time when this country was plagued by racial discrimination. He aimed to put a stop to it. He became a minister like his daddy, and he preached and marched for his cause.Abraham grew up in a loving family many years earlier, in a Europe that did not welcome Jews. He found a new home in America, where he became a respected rabbi like his father, carrying a message of peace and acceptance.Here is the story of two icons for social justice, how they formed a remarkable friendship and turned their personal experiences of discrimination into a message of love and equality for all. 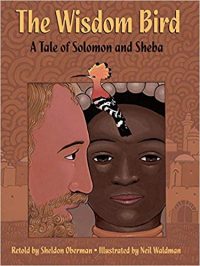 Mr. and Mrs. Stein and their young sons Gabe and Jacob adopt a baby girl from Vietnam