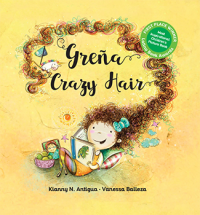 This colorful and empowering bilingual book teaches all of us that we are all unique and special, just like our hair! Meet Kiara, a smart, happy, creative and beautiful little girl who learns to love her curly hair, enabling her to develop self-acceptance and self-respect. -- from publisher

All the way to Havana

by Margarita Engle and Mike Curato

A boy helps his father keep their very old car running as they make a trip to Havana for his newborn cousin's zero- year birthday. Includes author's note about cars in Cuba

Follows a girl in the 1920s as she strives to become a drummer, despite being continually reminded that only boys play the drums, and that there has never been a female drummer in Cuba. Includes note about Millo Castro Zaldarriaga, who inspired the story, and Anacaona, the all -girl dance band she formed with her sisters

Lily Lujan is known as Little Chanclas because she wears her chanclas, or flip flops, wherever she goes, especially to parties, so when the chanclas come apart while she is dancing at a family barbecue and Chewcho the bulldog eats one, Lily is inconsolable until Granny Lola arrives with a solution

"Tata Gus teaches his grandson Aaron how to use natural healing remedies, and in the process helps the members of his family and his neighbors"--|cProvided by publisher

by Ana Crespo and Nana Gonzalez

"Brazilian boy Felipe doesn't have a soccer ball. When it's his turn to bring one to school, he uses a little bit of creativity and a few socks borrowed from his neighbors" --|cProvided by publisher. Includes historical note