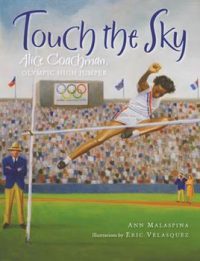 2012 — by Ann Malaspina and Eric Velasquez

A biography of the first black woman to win an Olympic gold medal, from her childhood in segregated Albany, Georgia, in the 1930s, through her recognition at the 1996 Olympics as one of the hundred best athletes in Olympic history. Includes bibliographical references