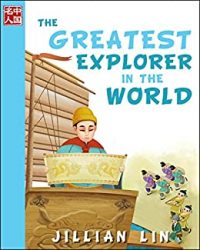 "DID YOU KNOW that China used to have the biggest fleet of ships in the world? The leader of the fleet was Admiral Zheng He, who undertook seven voyages to more than thirty countries to trade Chinese treasure like teas, silks, and porcelains. He reached as far as the Middle East and Africa, and possibly even farther. In this book, read about Zheng He’s adventurous life, from when he was a little boy dreaming about faraway lands, to the time he sailed across the seas and became ‘The Greatest Explorer In The World’." -- publisher