Last week Director Krista Aronson and I, as cofounders of the Diverse BookFinder, had the pleasure of joining Andrew Grant-Thomas and Melissa Giraud of EmbraceRace, for a webinar as a follow-up to our action guide on selecting “good” books among those featuring characters who are Black, Indigenous, and People of Color (BIPOC). One of our discussion topics was identifying key criteria to apply when selecting among the growing selection of books, with a particular child in mind.

The particular child I seek books for is my six-year-old grandson Taemin. (His baby sister Yuna also, but right now that’s simpler, mostly finding board books with diverse faces.) As I discussed in the webinar, I look for titles that:

As part of my response to being separated from my grandchildren during the pandemic, I’ve been sending Taemin books. But just this past month, I’ve gotten a new challenge: he has decided he’s only interested in nonfiction. When he took one book out of a package recently and saw that it was illustrated like a storybook, he yelled, “Oh no, it’s fiction!” and threw it on the floor. “I hate fiction!”

The book, Over and Under the Pond, is actually nonfiction, and it turns out he really likes it. Whoosh! was a big hit too.

Over and under the pond

Celebrates the forms of life that live above and under a pond, including turtles, red-winged blackbirds, blue herons, minnows, frogs, and catfish. 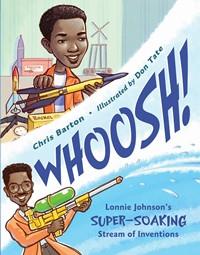 So how do I keep finding books with positive representation of BIPOC while keeping in mind my grandson’s stated preference for “only nonfiction”? Of course I turned to the Diverse BookFinder.

There are lots of possible ways to search for nonfiction titles in the collection, including filtering by the Biography, Informational, and Race/Culture Concepts "Categories," or doing a keyword search such as “weather” or “building.” Because of my grandson’s bent towards mechanics, engineering, and how things work, as well as the natural world, I chose to start with the "Content" filter for “STEM,” which brought up 194 titles to browse through.

Among those, I easily found a dozen that I think will appeal to him, while continuing to expose him to a wonderfully diverse range of BIPOC characters (see below). As soon as we’re back together, I’ll have a great list of titles to share with him, all of which I can borrow through interlibrary loan if they’re not available in our local library.

by Caroline Karanja and Ben Whitehouse

"It's time to clean Adi's room! If only a computer could do it for her! That gives Adi and her best friend Gabi an idea-think like a coder! These scientific thinkers put on their computer coding caps and make cleaning up a snap by sorting with variables!"--

Iris's kitchen is transformed into a busy bread lab one Saturday thanks to her favorite aunt, a plant scientist who helps farmers grow grain. Together they make whole wheat sourdough bread with just four ingredients, beginning with a mysterious goo called a "starter" that's teeming with invisible microbes. To Iris, bread making seems like magic, but it's really science!--Provided by publisher

by Joseph Bruchac and Bill Farnsworth

"The story of the first efforts to save the vanishing bison (buffalo) herds from extinction in the United States in the 1870s and 1880s. Based on the true story of Samuel Walking Coyote, a Salish (Kalispel) Indian who rescued and raised orphaned buffalo calves"--Provided by publisher

by Helaine Becker and Dow Phumiruk

You've likely heard of the historic Apollo 13 [mission]. But do you know about the mathematical genius who made sure that Apollo 13 returned safely home? As a child, Katherine Johnson loved to count. She counted the steps on the road, the number of dishes and spoons she washed in the kitchen sink, everything! Boundless, curious, and excited by calculations, young Katherine longed to know as much as she could about math, about the universe. From Katherine's early beginnings as a gifted student to her heroic accomplishments as a prominent mathematician at NASA, this is the story of a groundbreaking American woman who not only calculated the course of moon landings but, in turn, saved lives and made enormous contributions to history.--Adapted from book jacket

A biography of Isamu Noguchi, Japanese American artist, sculptor, and landscape architect, focusing on his boyhood in Japan, his mixed heritage, and his participation in designing and building a home that fused Eastern and Western influences. Includes an afterword about Noguchi's adult life and works, plus photographs.--Provided by publisher

How do bridges not fall down?

by Jennifer Shand and Srimalie Bassani

Have you ever wondered how bridges don't fall down? Or how really old buildings stay standing up? In the How Do series, readers are welcome to guess along with the rest of us-and then explore the science behind the right answers. Basic principles of architecture and engineering, including an introduction to bridges, locks, arches, columns, and skyscrapers are explored through diagrams, photos, and informative and engaging text.

by David A. Adler and Anna Raff

We can't see magnetism, but it's everywhere around us - even the Earth is a giant magnet! Adler covers the basics of magnetism, explaining terms such as attraction, pole, electromagnetism and force.

Up! up! up! skyscraper

by Anastasia Suen and Ryan O'Rourke

The world is not a rectangle

A biography of architect Zaha Hadid, who grew up in Baghdad and went on to design buildings all over the world. She became one of the most irreverent, controversial, and celebrated architects in the world. -- Publisher description